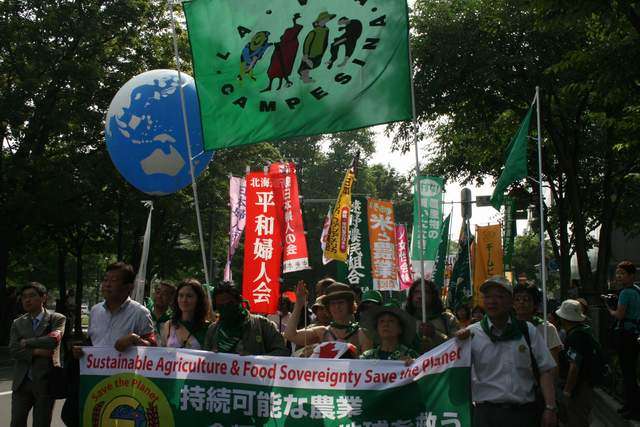 “The World Bank continues to finance dirty industries and is now trying to recast itself as the saviour of the planet. If Fukuda, Bush and Brown have their way, billions in taxpayers’ money would be used to push developing countries further into debt, undermine UN climate negotiations and threaten Indigenous Peoples’ land rights.”

Peasant farmers, environmentalists, workers and activists are protesting and speaking out during the G8 against the World Bank. Though the Bank now asserts a desire to be a leader in tackling climate change, the majority of the World Bank’s carbon finance portfolio has been channelled towards polluting industries, it has financed industrial logging and its support for coal-fired and other fossil-based power generation is on the increase.

The World Bank has a notorious track record for pushing loans for industrial and agricultural policies that have increased poverty, indebtedness, unemployment and environmental damage.

“If G8 countries are serious about tackling climate change they should not waste their money on schemes that will do nothing to solve the climate crisis. The World Bank itself is in a deep crisis and is trying to boost its rock-bottom ratings by hijacking the climate bandwagon. It is totally unjust that developing countries should be coerced to take out loans to deal with climate problems that they did not create.”

The climate negotiations in Bali last December opened the door for the World Bank to play a much more prominent role and this threatens to undermine the integrity of a post-2012 climate deal. During climate talks in Bonn last month, the G77 + China as well as more than 120 civil society organisations released statements opposing the World Bank’s proposed funds.

“The current food and climate crises are mainly caused by unsustainable economic policies that have been ruthlessly imposed by the G8, World Bank, the WTO and transnational corporations. These policies are destroying local food production and livelihoods. If we are going to cool out planet and feed the world, we must promote real solutions such as sustainable family farming and peoples’ food sovereignty.”

During the G8, La Via Campesina, Focus on the Global South, Friends of the Earth International and other social movements and civil society organisations are highlighting how corporate-driven policies being pushed by G8 nations are having serious negative impacts on communities and their environment around the world.

More information on the World Bank’s climate investment funds can be found at:
http://action.foe.org/t/3877/content.jsp?content_KEY=4176

The statement and background documents are online at: http://www.endoilaid.org/wbcif

For more information on the G77 and China ’s opposition to the funds, see TWN’s report at:
http://www.twnside.org.sg/title2/finance/twninfofinance20080401.htm