By Mark Weisbrot
The story of the decade, and perhaps the century, has finally made it to the front pages: millions of people who could be saved are dying from AIDS. The reason for their unnecessary, premature, and often agonizing deaths is now becoming clear: it is pure, unadulterated greed.

This is a scandal of biblical proportions. The $350 billion pharmaceutical industry — one of the most profitable and powerful in the world — has teamed up with its allies in the US government to deny millions of people access to affordable, life- saving drugs.

In the United States, people who are infected with the HIV virus can now have their lives extended indefinitely through a combination of drugs known as AIDS cocktails. The cost of these drugs is $10,000 to $15,000 a year — placing them far out of reach of the 33 million people in low-income countries, including 25 million in sub-Saharan Africa, who need them.

But the cost of producing these drugs is a tiny fraction of their price. An Indian generic drug manufacturer, Cipla, recently offered to provide the drugs to governments for $600 and to non- governmental organizations for $350.

For millions of people these drugs would become affordable; in the poorer countries, where annual income per person is in this range, they would be affordable with relatively modest foreign aid from the richer countries.

But the pharmaceutical companies are adamant. "They are stealing my intellectual property, and I cannot accept that," said a top Merck official.

Most people would not be convinced by this argument. Should millions of people be condemned to death in order to protect the patents of pharmaceutical companies?

In the face of growing political pressure and moral outrage, the drug companies have begun to offer some of these drugs at increasingly steep discounts. But even Merck’s latest offer, ostensibly at cost for two of the commonly used drugs that make up the AIDS "triple cocktail," would still leave the price at 3-4 times what generic competition would bring.

There are also a number of other problems with allowing private monopolies to determine the price and availability of these desperately needed medicines. The cost in human life could be very high if they decide to drag their feet, demand other concessions, change their prices, or otherwise abuse their God-like power over the lives of millions.

The companies counter with an economic argument: these drugs would not exist if not for the monopoly profits that finance research and development. But there are other ways to fund this research — in fact many of most expensive new drugs were discovered with the help of public funds.

From a strictly economic point of view, a patent monopoly is a very inferior means of financing research. A basic principle of standard microeconomics is that the price of a good should be equal to the cost of producing an additional unit. Monopoly pricing, especially at 15 or 20 times the cost of production — is enormously wasteful and inefficient. And in the case of essential medicines, the toll of this inefficiency is measured in human lives.

As a matter of law, US patents do not automatically extend beyond our borders. But the drug companies and their allies in Washington have a formidable arsenal of weapons to force compliance from poor countries. These include economic pressures, lawsuits, and the World Trade Organization. When South Africa — where 4.2 million people are infected with the AIDS virus — passed its Medicines Act in 1997 to make these drugs more cheaply available, Washington retaliated with trade sanctions, postponed aid, and other economic threats.

Public pressure from activist groups forced the Clinton administration to reverse its policy against South Africa. But the battle was far from over. For example, the United States is currently pursuing a complaint against Brazil at the World Trade Organization over a Brazilian law aimed at increasing domestic production of AIDS drugs. And the pharmaceutical companies are still challenging South Africa’s law in that country’s courts.

Here is a simple reform that is consistent with basic humanitarian as well as economic principles: no enforcement of patents for essential medicines in low- income countries. This would allow for treatment of millions of people who would otherwise die.

The pharmaceutical companies do not appear ready to abandon their quest for worldwide monopolies over the drugs that they produce. But the public is becoming increasingly aware of their role, and it is hideously indefensible. It may take more severe pressures — such as boycotts by consumers and investors of the offending companies — before they get the message. But sooner or later, they will have to let go.

* Mark Weisbrot is co-director of the Center for Economic and Policy Research in Washington, DC. 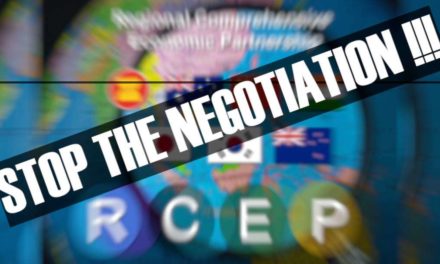