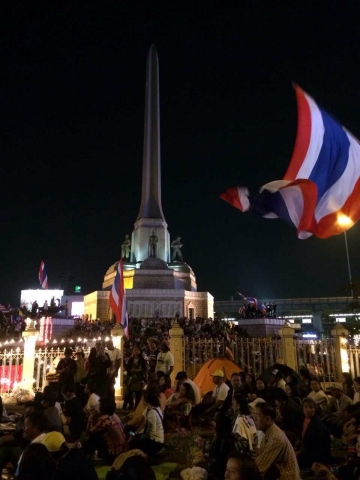 There are occasional references to the Edsa Uprising, with one speaker saying, “The Filipinos did it in nine days.  We can do it, too.”  The event to which he was comparing the Bangkok mass protests was the original Edsa Revolution that toppled Marcos in 1986, not to the more appropriate middle-class rebellion that removed Joseph Estrada from the presidency in 2002.

The programs at the rallies to bring down the Yingluck Shinawatra government not only feature bombastic speeches called hypak, a Thai word derived from Hyde Park in London, a favorite site of soapbox orators.

There are also popular singers belting out songs like Queen’s “We are the Champions” or John Lennon’s “Imagine” that are usually associated with progressive causes.  There are, in fact, a number of things about the anti-government demonstrators that a middle-class liberal observer can relate to.  Many of them are professionals, quite a few highly educated.  They are largely young.  They are fiercely against corruption.  In short, the sort of crowd that removed Joseph Estrada from the presidency in 2001.

There is, however, one thing that bothers liberal analysts, including many in the foreign press, about this crowd.  Many of the protesters appear to have lost faith in the key tenet of representative democracy:  the rule by people or parties that are elected by the majority of citizens.  In response to their efforts to oust her and her party from office, Prime Minister Yingluck Shinawatra dissolved Parliament on December 15 and set elections for February 2.

The People’s Democratic Reform Committee (PDRC), which had managed and maintained the massive protests in Bangkok for close to two months, said no to the elections and called on its supporters to “shut down Bangkok” beginning January 13 until Yingluck resigned and was replaced by an unelected “Reform Council.”  While there is no dispute that Thailand’s political system needs many reforms, the truth of the matter, many observers feel, is that the opposition has opposed the holding of fresh elections because it knows it will lose them, just as it has lost the last five parliamentary contests.

The current showdown between the Pheu Thai government and the opposition is the latest round in an epic struggle between conservative and populist forces that began when Thaksin Shinawatra, the brother of the current Yingluck, became prime minister of Thailand in 2001.

Thaksin came to power in the aftermath of the Asian financial crisis of 1997-98, which saw more than a million Thais drop to the ranks of the poor when what had been one of Southeast Asia’s most dynamic economies collapsed owing to capital flight followed by an austerity program imposed by hapless governments under the thumb of the International Monetary Fund (IMF).

Thaksin had benefited from globalization owing to his firms’ monopolistic position in private telecommunications, one of the economy’s most globalized sectors.  Yet, with unerring populist instinct, he sensed that the financial crisis catalyzed popular fears about free-market globalization, smoldering resentment at the urban and rural elites that seemed to be cornering the country’s wealth, and anger at the international financial institutions. On becoming prime minister, Thaksin made a number of dazzling, if opportunistic, moves. He paid off the country’s IMF loan and kicked the Fund out of Thailand, initiated a universal health care system that allowed people to be treated for the equivalent of a dollar, imposed a moratorium on the payment of farmers’ debts, and created a one-million-baht fund for each village that villagers could invest however they wanted.

This side of Thaksin won him a mass following among the country’s deprived and marginalized sectors.  But there was another side to Thaksin, the side that most of his urban and rural poor followers chose to ignore.

Thaksin literally bought his political allies, constructing in the process a potent but subservient parliamentary coalition. He used his office to enhance his wealth and that of his cronies. He failed to distinguish public interest from private gain.   He gave short shrift to human rights concerns, backing a police campaign against drugs that saw the extra-judicial execution of over 2000 people.

Like many others with overwhelming power in their hands, Thaksin overreached.  His getting the Revenue Department to exempt the sale of his family’s controlling stake in a telecom conglomerate from taxes brought Bangkok’s enraged middle class into the streets to demand his ouster. Feeling mortally threatened by Thaksin’s effort to redraw the landscape of Thai politics, the Thai establishment jumped onto the anti-corruption bandwagon. Unable to break Thaksin’s parliamentary majority or to achieve a critical mass in the streets to sweep him from power, the elite pushed the army oust him while he was abroad in September 2006.

The military-installed government that took over performed miserably, leading to its exiting the country and the coming to power through elections of a pro-Thaksin coalition.  A court-ordered dissolution of this coalition led to parliamentary maneuvers that saw a fragile alliance cobbled together by the minority Democrats led by Abhisit Vejjajiva come to power.

This resulted in the Redshirts, as Thaksin’s followers were called—as opposed to the anti-Thaksin Yellowshirts—massing countrywide and marching on Bangkok early in 2010.  This led to tragic street confrontations which climaxed on May 19, when the military broke up Redshirt barricades in downtown Bangkok, resulting in numerous deaths and arrests as a number of buildings, including the huge Central World mall, went up in flames, allegedly set on fire by the Redshirts.

Under fire for allegedly having given the green light to repressive actions, the Abhisit government was voted out of office in another electoral exercise in July 2011 and replaced by a coalition led by the Pheu Thai party headed by Yingluck, Thaksin’s younger sister.

Yingluck has been widely seen as a stand-in or puppet for his brother, who is described as ruling from Dubai, where he lives in exile, having been convicted and sentenced in absentia for corruption by the courts.

Perception turned into protest when her government tried to push through an amnesty bill that would have forgiven all those charged in connection with the tragic street 2010 street protests, both on the anti-Thaksin and pro-Thaksin side. The opposition contended, however, that the bill was mainly a ploy to allow Thaksin to return to the country without having to serve out his jail term.  This was confirmed when in an early morning parliamentary maneuver, the ruling coalition rammed through a provision that would extend the amnesty to ten years before 2010.

With the Bangkok middle class angrily taking to the streets, Yingluck retreated and told pro-government senators in the Senate to withdraw support from the bill.  It was too late.  Bangkok has always been an opposition stronghold, and the civil protest, led by Sutep Thaugsuban, one of the top leaders of the Democratic party, escalated, with the demonstrators numbering in the hundreds of thousands by mid-December. The anti-amnesty movement was transformed into a movement to oust the government.

At first staging rallies at the historic Democracy Monument in downtown Bangkok, the protesters moved on to shutting down government offices, giving the image of the government as being besieged and unable to function, a perception that was reinforced when the opposition Democrats resigned en masse from Parliament.

Yingluck’s counterstroke was to dissolve Parliament in mid-December and set new elections for Feb 2, 2014.  Sensing it had momentum, the opposition called for a boycott, insisting that Yingluck step down and calling for the formation of an unelected council that would formulate reforms.  To give muscle to these demands, the opposition launched the campaign to “shut down Bangkok,” targeting government buildings and occupying key intersections in downtown Bangkok.  Now entering its second week, the shutdown has not succeeded in getting Yingluck to resign, although it has triggered a tailspin in the city and the country’s economy.

The opposition’s stand against elections has deepened the divisions within Thailand’s liberal and progressive community.  For Kraisak Choonhavan, an ex-parliamentarian who is one of the pillars of the human rights community, non-participation in the coming elections is justified by the fact that the priority is a “total reform” of the electoral system.  “Every democracy needs such a period of reform,” he contends.

To others, the principle of one person-one vote, the basic tenet of democracy, is what is at stake.  Speaking as an foreign observer to the Bangkok Post, Chris Baker, who together with his equally prominent wife, economist Pasuk Pongpaichit, has written some of the most comprehensive exposes of Thaksin’s amassing of wealth and power, expressed concern that key forces in the PDRC “have clearly said they think Bangkok people should have more weight in the elections than non-Bangkok people.”  The Post itself, a supporter of the street protests against the Amnesty Bill, drew the line on protest leader Suthep Thaugsuban’s call to boycott the elections, characterizing it a “deeply flawed plan” that “contains hugely anti-democratic principles that are troubling at best.  The entire call for a year or more of this country under an unelected, unaccountable ‘council’ is unacceptable.”

To many liberals and progressives, recent remarks by scholar-activist Thirayut Boonmi, who has iconic status as key leader of the historic 1976 student uprising, are troubling.  According to an account of his comments at a recent forum that appeared in the Nation, Thirayut acknowledged that while the anti-government movement “consists of a minority in Thai society, mostly from the middle classes and people from the South,” he argued that “those who voted for the Yingluck Shinawatra administration have forfeited their rights by accepting a corrupt and dictatorial government, which would have to be removed by a ‘people’s revolution.’”  To people like Thirayut and Kraisak, extraordinary means are needed to rescue Thailand from what they feel is the all-pervasive corruption of the country’s institutions by the Shinawatra family which Thirayut likens to a “flock of mating vultures.”

From civil conflict to uncivil war?

What is clear is that both sides of the political divide defy simplistic explanations.  The protesters are not simply tools manipulated by traditional political and economic elites threatened by Thaksin’s threat to their interests, as some pro-government analysts have characterized them.

Most see themselves as participants in a grand crusade against corruption.  On the other hand, most of the masses that have brought the Redshirt coalitions to power are not bought and corrupted by Thaksin’s money, as they are portrayed in anti-government speeches; they really feel that they are fighting to salvage democratic rule and economic justice against reactionaries.

While the protests have still remained largely non-violent, instances of violence, including grenade throwings over the last week, portend another bloody denouement like May 2010.  Some pro-government sources people think the PDRC strategy is to provoke the military to intervene to oust Yingluck and impose Suthep’s unelected Reform Council.

There is tremendous hesitation on the part of the military to embark on this, given the terrible experience it had in governing the country after the 2006 coup, though another putsch this time is not out of the question.  There is also low probability of intervention from the king, who has long been regarded as a moderating force in Thai politics.  Old and ailing, King Bhumibol is no longer seen as being in a position to act as he did in 1992, when he brought opposing figures together to put an end to military repression of pro-democracy protests.

With no third force to break the deadlock, there is no prospect in sight except deeper and sharper polarization.  If Yingluck is ousted, it will be the turn of the Redshirts to invade Bangkok.  The February 2 elections may push through and put another Pheu Thai government in power, but this will not bring an end to the opposition’s refusal to grant legitimacy to any Thaksin-led government and put its middle-class muscle to oust it.  For many on both sides, it is no longer a question of if but when this deep-seated civil conflict descends into outright civil war.

Report: Workshop on forest carbon initiatives and community rights in the Mekong Region 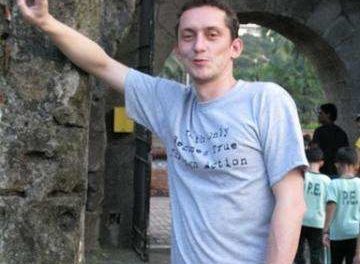 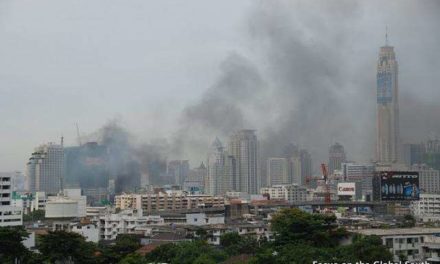 Aftermath of the battle : picking up the pieces