31 May 2012 – A letter was delivered today at 13.30 to the Thai Prime, Minister Yingluck Shinawatra, signed by 57 organisations around the world, and 35 individuals, including 11 academics, 2 Members of Parliament and 1 Bishop.  The letter is also endorsed by 18 Thai organisations.

The letter (attached) urges the Prime Minister to “stop prosecuting Thai citizens who are engaged in public campaigns for agrarian reform, and to give urgent priority to redistributive land reforms and equitable resolution of the land conflicts to ensure sustainable livelihoods for hundreds of thousands of smallholder communities throughout the country”.

This letter is issued just days before an appeal hearing that could result in the long-term imprisonment of 3 activists/peasant leaders who were involved in the Lamphun community-led land redistribution dating back to the year 2000.

The 3 accused could be facing as much as 4 years imprisonment for their role in community-led redistribution of land in Lamphun, in the culmination of a 9-year long court process.

The Community-led Land Reform Movement took part in mass occupations of disputed lands in various districts of Lamphun and Chiang Mai in the period 1997-2003.

After occupying the lands, the members set up rules for community landholding, including conditions to put the land into production.   The main aim of the community land title set up by the movement was to ensure that the land stayed with smallholders, and remained in the hands of the local community.

The rules established by the movement in Lamphun were the model upon which the official community land title was eventually based when this new form of tenure was established ten years later in 2011 by order of the Prime Minister.

The letter also underlines the escalation of state prosecution of villagers and networks fighting for their land rights.

The prosecutions of members of the Lamphun-Chiang Mai reform movements are long-running cases.  However in the last few years there have been many prosecutions of Thai people in the process of trying to secure their land rights, as demonstrated by the recent arrests and evictions of members of the Land Reform Network of the Bantad Mountain Range and the Northern Farmers Network.

Sumitchai Huttasan, advisor to the Northern Peasants Federation, said “If reforms were carried out effectively by the government, such as the completion of the process of community title, it would not be necessary for the state to prosecute village people trying to defend their land rights.”

Shalmali Guttal, of Land Research Action Network, one of the coordinators of the campaign, says “We are seeing similar trends of persecutions of local communities by the State in both Thailand and Cambodia.  Individuals are given long prison sentences for defending their rights to land, livelihoods and homes.  But State forces burn and destroy villages with impunity. This is shocking and completely unacceptable.”

Jacques-Chai Chomthongdi, of Focus on the Global South, another signatory said “the current regime in Thailand is a democratically elected government, which has emphasized its policy to promote the welfare of the poor and rural people. It would enhance the government’s promoted pro-poor agenda if the government could work with progressive grassroots groups and seriously consider their proposals for reform. Unlike short-term election-oriented policies, land reform is one of the fundamental structural reforms needed to resolve the problems of the poor.”

Thailand not only has national obligations to carry out land reform under the Agricultural Land Reform Act, but Thailand has also reaffirmed its “strong belief in the essential role of agrarian reform” on the international stage at the International Conference on Agrarian Reform and Rural Development (ICARRD) of the Food and Agriculture Organization of the United Nations (FAO).

The UN’s Committee on World Food Security (CFS) has recently adopted Guidelines on Tenure of Land, Fisheries and Forests which call on states to conduct redistributive reforms for social, economic and environmental reasons and to recognise and respect customary land tenure.

Sofia Monsalve, of FIAN International, says “The criminalization of peasant leaders acting in defence of their right to land is widespread, not only in Thailand, but worldwide.   Paragraph 4.8 of the CFS guidelines urges States to respect and protect the civil and political rights of defenders of the rights of peasants, indigenous peoples, fishers, pastoralists and rural workers.” #

– One person, a villager from Tha Luk, died in prison during his six month sentence.

–       Their sentences were reduced by the Court of Appeal to 4 years. 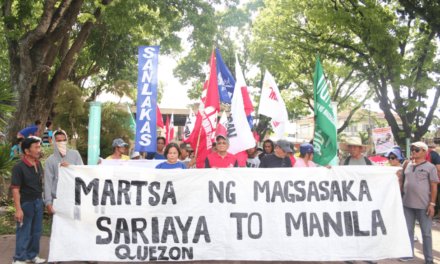 Solidarity Statement from Focus on the Global South for the Filipino Farmers Who Marched for Land, Food and Justice