Climate change and its impacts could no longer be viewed as mere environmental concerns. Climate change is now a reality in the daily lives of the people in the ASEAN region, as their livelihoods and means of sustenance, their habitats, their communities and resources which are their lifeblood are threatened.  A fundamental reality in the current climate crisis is that the majority, especially the poor—particularly women—who have consumed less and contributed very little to the climate crisis, are the ones that are greatly affected by its impacts.

ASEAN is thus facing serious problems in the aspects of natural resource sustainability, environmental degradation, and socio-economic impacts including livelihoods destruction, displacement of individuals and entire communities and social conflicts.  In response to this urgent, multi-fold environmental crisis related to climate change, the 5th ASEAN Peoples’ Forum (APF2) in October 2009, in Cha-am, Thailand, called on ASEAN’s leaders to instigate a process that will lead to the creation of a fourth pillar on Environment in its structure and governance. With such a pillar, the Asean will be obligated to place environmental sustainability, economic, gender, and social and climate justice at the center of its transactions and processes.

The third pillar of the ASEAN, more specifically “Section D” of the Socio-Cultural Pillar, focuses on environmental and climate change concerns. ASEAN has also set up a working group on climate change. However, beside some strong positions on some key aspects of the UN Framework Convention on Climate Change (UNFCCC) negotiations by some individual ASEAN countries, the ASEAN as a body has not significantly influenced the negotiation process as a regional bloc. ASEAN member states have so far failed to generate a unified position while other regional formations such as the European Union or the ALBA countries in Latin America have come out strong with regional perspectives. This is so because the different ASEAN countries have different national and economic interests and in most cases these interests have guided their participation in the UNFCCC negotiations.

ASEAN should therefore recognize that climate change and its attendant impacts are linked to governance issues. The destruction of the environment is deeply embedded in the system of governance, as well as in economic planning. For one, the region’s economic development model has depended heavily on natural resources extraction through large-scale development projects, and, as a result, ASEAN countries are now facing a serious problem in natural resource depletion, environmental degradation and local livelihoods destruction.  ASEAN should challenge its own model of development that prioritizes growth for growth sake while putting the sustainability of our part of the planet and the future of the next generations at risk.

Meanwhile, agreements on trade and investment between ASEAN and industrial countries have been framed by the legal systems and policies of the industrial countries.  Impacts of these agreements on the indigenous peoples and local communities have often been disregarded. The paradigm of industry-led development, where the rural sector is squeezed to provide the resources necessary to support industrialization and urbanization, must be challenged by all ASEAN countries in order to promote policies aimed at achieving food security, food sovereignty and sustainable farming.

With a fourth pillar, ASEAN can become pro-active in addressing climate change and can be engaged more by civil society for a more transformative framework. 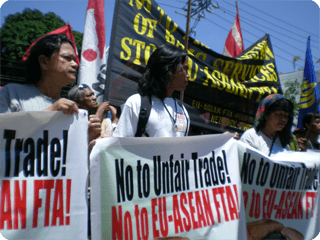 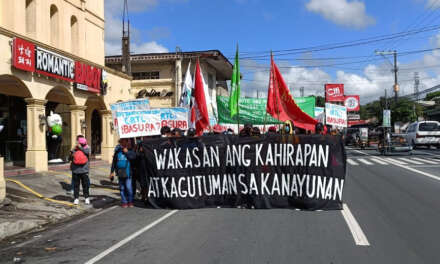 CASE STUDIES: Beyond the “Green Economy”: Global movements for climate justice in a fracturing world