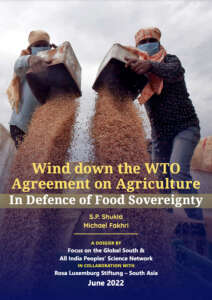 The World Trade Organisation (WTO) will host its 12th Ministerial Conference (MC) from 12-15 June 2022 in the looming shadow of the pandemic and the Ukraine war. Key issues at Geneva include the proposed waiver of patents to ensure access to COVID vaccines and therapeutics, agriculture, fisheries and WTO reform.

India finds itself, yet again, on the backfoot at the Agreement on Agriculture (AoA) negotiations. In 2021, as the pandemic raged, India’s ranking in the Global Hunger Index plummeted to 101 (it was 63 in 2014). In May 2022, India’s ambition to export wheat to the world in the wake of the Ukraine war came to naught with output drops and rising prices. While the pandemic underlined the need to scale up public distribution systems (PDS), India is under fire at the WTO from developed countries to scale down its food programmes and subsidies.

In this dossier, we bring together a series of articles that will inform the reader about agriculture and food policy in India and the AoA’s bias towards agribusiness driven agriculture. The first six articles are by SP Shukla, India’s former Ambassador to the General Agreement on Tariffs and Trade (GATT). These articles, originally published at https:// www.thecitizen.in/ point to various aspects of agrarian distress in India. Shukla highlights that some seven million agricultural households have permanently left agriculture between 2012 and 2019. The lack of employment opportunities and income have resulted in an unprecedented reduction in per capita availability of food grains for the rural poor, pushing as large as three quarters of the rural population below the poverty line. He further stresses that the syndrome of corporate agriculture continues to govern policymaking and argues that the WTO AoA paradigm is ill suited for India and the developing world. It was crafted in favour of temperate zones, capital intensive, corporate agribusiness driven, export oriented, peasant insensitive and mass livelihood threatening agriculture pathways. Instead of the AoA, Shukla makes the case for a renewed Global System of Trade Preferences (GSTP) treaty among developing countries that is consistent with the vision of south-south cooperation and collective self-reliance. Shukla says that the G-20 group within the WTO has a historic responsibility for restoring this vision and making it operative.

The report of Michael Fakhri (the United Nations Special Rapporteur on the Right to Food) shows that the WTO AoA has been a key barrier to realizing the right to food. The existing rules need to change, but it is unlikely that WTO members can overhaul the AoA to meet long standing demands of equity. Fakhri argues that the AoA should be wound down. And governments and social movements should be free to then negotiate new international food agreements based on principles of dignity, right to food, self-sufficiency, solidarity, recognition of limits of growth, transformation of the economy and decent work.

While saluting the grit, innovation and national character of the farmers movement in India, the report underlines the need for peasant leaders to also engage at the international sphere and demand for agriculture to be taken out of the WTO.

Reports indicate that in the agricultural negotiations leading up to MC 12, developing countries are facing a dead end. This is the time for the south to come together to protect their joint interests in agriculture and make their voices heard in a decisive and strategic manner.

All India Peoples Science Network and Focus on the Global South