Trump and the Asia-Pacific: The Persistence of American Unilateralism 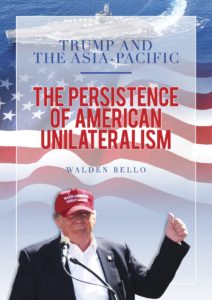 There is a widespread perception, especially among East and Southeast Asian elites, that the United States is in a process of disengagement from the Asia-Pacific under President Donald Trump.  This study shows that there is little basis for this view.  Along with the perception of strategic disengagement is the idea that Washington is abandoning multilateral approaches to ensuring its interests and those of its allies.  This report disputes the premise of this assertion and shows that unilateralism has been the dominant manner in which the US has asserted its military and political interests in the region, and that this unilateralist approach continues today.  At no point in the last few decades is the US presence as destabilizing as it is today, with the Trump administration waging a trade war against Beijing at the same time that it has escalated the threat of the Pentagon’s offensively-oriented “AirSea Battle” strategy by preparing the deployment of intermediate range nuclear missiles directed against China in the Western Pacific