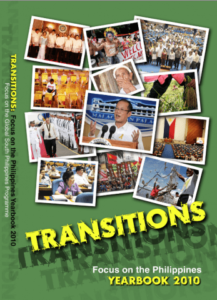 …As long as the current social-political and economic situations in our country prevail, as long as the government pursues the same economic policies and ways of governing, this collection will be useful.  But we wouldn’t want the former to continue; we’d just rather this book soon come down as a valuable piece of historical record.” – From the “Overview” of Yearbook 2010/Transitions

Since 2009, Focus on the Global South-Philippines Programme has published a yearbook to gather together, under a theme, articles/pieces that have been originally part of the past year’s issues of our e-bulletin Focus on the Philippines (News Analysis and Features). In Yearbook 2010, there are about three new articles written for the purpose of giving updates on some very key issues.  As in the past yearbooks, we also want to highlight significant events that continue to bear on the Philippines and Filipinos through the selections in Yearbook 2010.

Yearbook 2010’s theme, which has been adopted as well as its title, is Transitions—to indicate the changes or process of change that the Philippines experienced in 2010 and continues to undergo now as consequence of events that occurred in the past year.