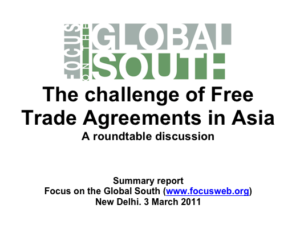 04/04/2011
Under: Deglobalisation, Publications, Trade and Investment

Despite the ongoing multiple crises of employment, food, finance, energy and climate, most Governments have not eschewed trade liberalisation. Due to an interplay between geo-politics and the rise of emerging economic powers and their multinational corporations, Asian countries have set aside the WTO Doha Round failure and have preferred to engage in a complicated web of ambitious bilateral and regional Free Trade Agreements (FTAs). The rapid spread of FTAs in Asia has made it the global hub for trade liberalisation. As of February 2011, the region has some 63 concluded FTAs with several more under various stages of negotiation.

Asian civil society groups have also been in the vanguard; doing research, campaign and advocacy in critiquing the lack of transparency and anti-development nature of these trade and investments treaties.

This roundtable organised by Focus on the Global South brought together academicians, researchers and activists ( including two parliamentarians from South East Asia) to discuss the state of play, share updates on national level campaigns and discuss issues of mutual collaboration. Issues addressed include employment, finance, agriculture and access to affordable medicines and health care.