Rethinking Regionalisms in Times of Crises 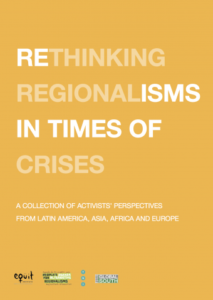 A collection of activists’ perspectives from Latin America, Asia, Africa and Europe

The idea of regional integration as we know it today emerged in post-war Europe. The chosen model of inte- gration would later serve as a reference for theoretical approaches and concrete political initiatives of regional cooperation worldwide.

The process of unifying Europe was originally based on a vision of the political elite on the need to avoid future outbreaks of war between European powers and to build a path to peace through the development of common economic, political and strategic actions and agreements. From the seminal European Coal and Steel Community, Europe advanced progressively towards building increasingly stronger ties in terms of mechanisms of governance and legitimacy, economic integration and forms of social and cultural exchange.

The steps taken by the old continent served as a beacon for many processes in Latin America, Africa and Asia. Only ten years after Europe, classical regional integration processes were initiated in other parts of the planet. In Latin America and other regions of Africa and Asia, they were influenced by the economic thought of the Economic Commission for Latin America and the Caribbean (ECLAC). Under the influence of Raul Prebisch’s development theories, ECLAC defended, during the 1960s-1970s, a model of regional integration based on changing the terms of trade. For these changes to happen, imports of industrialised products needed to be replaced by factories in Latin American countries and the scale of production had to be broadened, increasing the size of markets through integration. Regional integration based on uniform

and moderate external tariff would help to create a grand market for regionally produced manufactures. This wave of “developmentalist” integrationalism took on important institutional forms in Central

America, the Andean region and the Caribbean, where governments went as far as creating regional par- liaments, customs unions and other mechanisms. Even so, the dream promised by Prebisch did not neces- sarily come true due to lack of coherence and political will of those in government, among other reasons.

With the rise of neoliberal globalisation, regional integration suffered a change in direction both in Europe and the rest of the world. It was in the mid-1980s and the 1990s when ‘open regionalism’ was widely adopted as the theoretical framework that led governments to promote market-led, export-driven regional integra- tion. The boom of ‘open regionalism’ as the defining framework of regional processes clearly coincided with the consolidation of neoliberal globalisation. Both paradigms reinforced each other. From then on, regional schemes were considered building blocks towards establishing a truly global market economy. According to this logic, their purpose was to ensure the competitive insertion of countries into the world economy.

As a result, the definition of regionalism was narrowed down to economic terms. Most governments around the world pursued a path of market deregulation, widespread privatisation, and frantic competition to attract foreign direct investments (FDI). In fact, a distinctive feature of the wave of regionalism in the

1990s was the promotion of Free Trade Agreements (FTAs) and Investment Treaties as key tools to stimu- late liberal economic and political reforms. There was, indeed, a blind belief in the export-led and invest- ment-driven development model.

The free trade agreements launched in the 1990s, which neoliberal theorists understood as forms of integration, momentarily benefited only a few companies – especially those of the financial sector. What is more, in general, they produced terrible results in both social and productive terms in most countries. They also generated strong conflicts in some of the integration processes that started in the earlier phase, leading, in some cases, to the collapse of integration institutions. One emblematic case is the Andean Community of Nations (CAN).

Fast-forward to the 1990s-2010s, we find ourselves in a whole different scenario. Today, we are in the midst of a convergence of global crises (financial, economy, energy, food and climate), which has exposed the exhaustion and failure of the neoliberal development model. Furthermore, we can observe that govern- ments during the 2000s started to question the “benefits” of neoliberal globalisation.

In the first decade of the 21st century, the neoliberalised integration model was put to the test in Europe by the global economic crisis, and it failed. The very same model of integration that was once portrayed as the ideal one to follow, has now been exposed as the source of Europe’s crisis. Furthermore, the harsh aus- terity policies imposed on periphery European countries confirmed the deeply undemocratic construction of the EU1.

It has become increasingly clear that regional integration does not automatically lead to socially and ecologically just societies. Most of the current models of regional integration around the world – from Latin America (CAN, Mercosur) to Asia (ASEAN, SAARC), Africa (SADC) and Europe with the European Union

– are not people-centred.
Nonetheless, the regions are still privileged arenas for developing and implementing alternatives. Social

movements and civil society organisations around the globe still believe there is a need to reclaim regional integration and advance an alternative development paradigm2.

The demand for people-centred regional alternatives has been at the core of people’s struggles for the last 10 to 15 years. Social organisations and movements have conceptualised what people-driven regional integration means and have advocated for concrete regional alternative proposals that mark a clear break with the corporate-led model of development. The calls for people-centred regional integration processes are based on the principles of cooperation and complementarity, rather than the principle of competition.

This means, for example, that to face the current global economic crisis, regional initiatives should prior- itise: the creation of regional reserve funds to insulate countries’ economies from the destructive effects of speculative finance; the re-activation or creation of regional development banks that provide loans for projects oriented towards endogenous and sustainable development of the region and people-centred re- gional trade. Regional initiatives have also aimed to address the threats of climate change. For example, redirecting (food) production and trade towards regional markets in order to reduce international trans- port/trade flows and their impact on climate; strengthening cooperation between neighbouring countries and communities that share rivers and other water sources to secure the equitable distribution of water for all; and promoting alternative renewable energy sources through regional coordination and the sharing of technologies. These types of regional initiatives can be vehicles to raise living standards, promote and pro- tect national industries and protect local agriculture.

The calls for de-globalisation and alternative regionalisms have, so far, found echo in some governments in Latin America. There is currently a dispute between the open regionalism/free trade model and a “neode- velopmentalist” tendency, which is strongly present in Mercosur and Unasur and personified mainly by the government of president Lula in Brazil. The Lula administration pursued a policy that, without departing completely from elements of economic orthodoxy, gave priority to the development factor as a key part of its strategy, with strong State participation in the form of public investment and support for its corporations.

This approach reduced the neoliberal vigour, but left some of its pillars intact. Its expression in integration processes aims to reconcile negotiating trade agreements outside of the region, with policies that strengthen the region, such as responding to asymmetries – albeit in a limited way –, promoting common infrastruc- ture and the integration of energy systems, yet without pushing excessively for trade liberalisation within the bloc.

At the same time, in Latin America new heterodox political processes have arisen: the Bolivarian Al- liance for the Peoples of our America (ALBA)3 and the People’s Trade Agreement (TCP)4. Rejecting the principles of the neoliberal model, these processes have embraced complementarity and solidarity as pillars of integration, together with the idea of autonomy and independence from the major powers in the re- gion. Other initiatives that seek to develop counter-hegemonic forces in Latin America are Union of South

American Nations (UNASUR), Community of Latin American and Caribbean States (CELAC) and even Mercosur, though without the depth and intensity of ALBA and the TCP.

Notwithstanding these promising initiatives, regional integration projects based on the open regional- ism approach still dominate. In Latin America, they co-exist with the still embryonic alternative region- alisms initiatives that are very much under dispute. In the other regions, most governments have ignored the calls of civil society to make integration meaningful to people’s needs. No less than Bolivian Presi- dent Evo Morales acknowledged that the diplomacy of the people has grown faster than the diplomacy of governments, with the people themselves active in finding solutions to societal problems. Addressing the heads of state and people of South America in October 2006, President Morales posed the challenge of establishing “an integration of, and for, the peoples”5.

In Latin America and elsewhere, the challenge remains for social movements and civil society to reclaim regional integration from the neoliberal trend, and to recreate regional integration processes based on so- cially just, environmentally sustainable and participatory principles, with the objective of diffusing these desired values in official diplomacy

This collection of articles is intended as a contribution to strengthen the idea that people-centred re- gional integration is not only needed but that it is also possible. It aspires to provide social organisations with new ideas and proposals that can inspire action within their specific regions. It aims to advance the discussion, focusing on the elaborate and complex details of issues, to encourage civil society to engage and dialogue more solidly with governments and other public agents. Hopefully it will help foster debate towards the building of awareness and consensus within the movements, and motivate them to go beyond nationalist theses and promote the idea of regional cooperation and solidarity.

This seminal reader presents the perspectives of activists and advocates who are immersed in the strug- gles for alternative regionalisms. The articles describe the context within which they negotiate restrictive regional spaces and propose regional alternatives.

The reader has three sections. The first one, “A world in crisis: the state of regional integration five years later”, includes analysis of the current situation of integration processes in Latin America, Africa, Asia and Europe in relation to the changes in the global scene and their specific internal dynamics. A second section,

“Regional responses to the global economic, food and ecological crises” concentrates on proposals on alter- native regional integration in specific areas, which, in one way or another, respond to the dynamics of the current crises. Here, we feature analyses of initiatives of innovative public policies, including: models for alternative regional financial integration in Latin America; the need to re-think the eurozone in Europe; the idea of a SAARC Food Bank in South Asia and proposals to face climate change as a region in ASEAN.