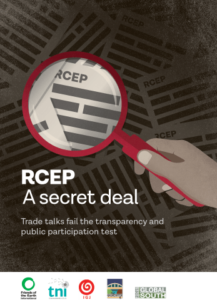 The Regional Comprehensive Economic Partnership (RCEP) is currently being negotiated between 16 countries in the Asia and Pacific regions. It includes China, members of the Association of Southeast Asian Nations (ASEAN) and other key trading nations such as Australia, New Zealand, South Korea, Japan and India.

Like other mega regional trade agreements, such as the Trans Pacific Partnership (TPP), RCEP negotiations are far-reaching, including trade and investment liberalisation, Intellectual Property Rights, services, competition policy and e-commerce. RCEP will impact on the lives of billions of people, from the quality of the food we eat to the energy we consume and the affordability of life-saving medicines.

Yet this report finds that the RCEP negotiations are being conducted almost completely in secret, with limited to no meaningful public participation. Most elected officials have, at best, limited access to the negotiating texts, which remain out of reach for civil society. Ad hoc or token stakeholder consultations are far from sufficient to make the process transparent or participatory. Meanwhile, big business lobby groups have a semi-official inside role in the RCEP talks, with privileged access and undue influence over many individual countries’ policy- making processes.

Report published by Friends of the Earth International, Transnational Institute, Indonesia for Global Justice, Focus on the Global South, and Paung Ku