Publication: Learning from Our Roots 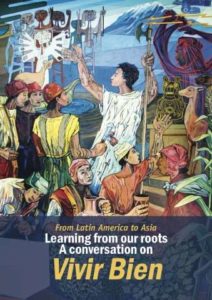 Focus on the Global South recently undertook a series of exploratory discussions with indigenous peoples, social movements and civil society organizations in Asia to see what can be learned about the concept of “Vivir Bien” as developed in South America; how similar concepts are practiced throughout Asian societies, and whether these concepts can provide feasible alternatives to the neoliberal model.

This publication is based on those discussions, which occurred in Thailand, India and the Philippines in the first months of 2013.

While found at the opposite ends of the Earth, Asia and Latin America have many parallel experiences in modern history, such as being governed by neoliberal policies creating widespread social and ecological damage in the name of economic growth. Social movements in both regions have responded by developing alternatives that promote the welfare of people and the planet over the interests of corporations and international capital. One such alternative which has gained much attention in recent years is Vivir Bien, or Living Well, developed from common beliefs of indigenous peoples in South America.

Available in English, Thai and Hindi.