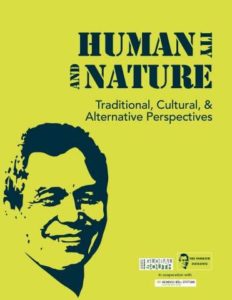 An economy is often defined as “the wealth and resources of a country or region”. Few would contest that the greatest wealth and most fundamental resource for humanity is the earth on which we live; yet most do not see our environment as an economy in itself.  Conversely, nearly all contemporary economic and development models see the natural economy as a resource to be exploited (or at best managed) to serve the needs of the monetized economy.

While this perspective is certainly predominant, it is neither intrinsic nor universal. It is also increasingly proving to be unsustainable.

Focus on the Global South and The Sombath Initiative, in cooperation with the Heinrich-Böll-Stiftung, held the Sombath Symposium on February 15-17, 2016, to present and discuss knowledge and practice drawn from different cultures and traditions that can serve as an alternative foundation to the predominant growth-driven development model.

This publication, “Humanity and Nature: Traditional, Cultural and Alternative Perspectives”, compiles essays discussing these perspectives, as well as syntheses of the different parts of the symposium.  The Sombath Initiative and Focus on the Global South hope that this publication will serve as resource material, as well as a guide document for the ongoing and future work on alternative perspectives on humanity’s relationship with nature.

A short video of the symposium and videos of each presentation are also available to view at The Sombath Initiative YouTube channel.

For more information about The Sombath Initiative and Sombath Somphone, please visit www.sombath.org