Outcomes of the Twelfth Ministerial Conference 2022 of the World Trade Organization: Implications for India’s Agriculture and Food Security 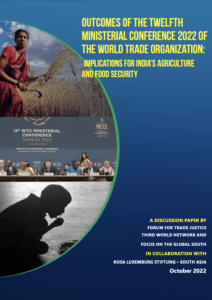 A discussion paper by Forum for Trade Justice, Third World Network and Focus on the Global South, in collaboration with Rosa Luxemburg-Stiftung South Asia.

The Twelfth Ministerial Conference (MC12) of the World Trade Organization (WTO) took place after multiple delays, and was expected to provide novel solutions to the crises that have rocked the world recently. Developing countries expected MC12 to make COVID-19 vaccine production easier, allow food security programmes to thrive, create the conditions for the increasing production and productivity of agriculture, and overall provide rules that are better suited to the needs of people around the world today.

MC12 was a crucial Ministerial Conference for India in particular. The country is in the midst of a long-running agrarian crisis, and is also under fire for its domestic food security programmes and attempts to export food. After the failure of MC11, MC12 was expected to provide India with some relief over agrarian issues.

However, MC12 has ended up disappointing developing countries including India. Developed countries insist on using demonstrably failed methods to organise global agricultural trade. MC12 has failed to agree on outcomes critical for developing countries to strengthen their agricultural production and distribution, and has also been unable to deliver any new tools to fight situations of food crises. On the other hand, it has pushed an agenda of liberalisation at all costs, which is inimical not only to the interests of developing countries but to the interests of all people. The result of this insistence to ignore changes in the international order is that MC12 has taken the WTO beyond “business as usual” to “more business than usual”. As the WTO rapidly loses credibility, it is incumbent upon developing countries to unite and provide a new framework for global trade, one based on complementarities rather than competition, and one that prioritises food security, food sovereignty, and overall autonomy. It is time for an international democratic architecture for agricultural trade.

This report highlights expectations from MC12, details the actual outcomes and their implications, and lays out a path for future action, one that focuses on the political struggle for peasant unity. It also notes the important role that civil society can play to facilitate the creation of a new global trading order that is led not by Western capitalist interests, but by the masses of people in the Global South.