Of Water Justice and Democracy: Alternatives to Commercialization and Privatization of Water in Asia 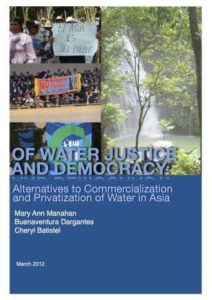 Asia is home to immense natural and productive resources such as land, water, forests and a diverse natural environment. It is a region of tremendous wealth, modern cities, industrial capacity and growing urban centers, especially with China and India rising as economic powers. However, the region can be best described as a paradox: despite the abundance, Asia is known for its large pockets of poor people and overwhelming inequalities within and between its rural and urban areas. Income inequalities are severe in sub-regions (Chavez, 2011). At the same time, it is a diverse and complex region, with wide disparities in history, culture, political economy and current development paths.