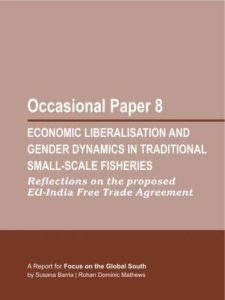 Based on field work in the southern Indian state of Kerala, this paper explores the dynamics within traditional small scale fisheries in the context of the controversial negotiations for a Free Trade Agreement between the European Union and India. The initial sections underscore that the bias in fisheries policies towards an export led model has been at the cost of the environment and fishing communities, especially women.

The authors then argue, by scrutinising key provisions, that the EU-India FTA further deepens this model and therefore is unlikely to ameliorate their condition. On the other hand deregulating rules on imports and foreign investment is likely to increase the pressure on fish resources, fishing grounds and coastal land. Further there is a deep democratic and developmental deficit, with talks being held only between trade bureaucrats, with no meaningful participation either by the Kerala Government or representative bodies of fishing communities. By examining current national and international policies on fisheries and then juxtaposing these policies with current realities on the ground the paper puts forward the case for a re-look at the premises of the FTA, itself.