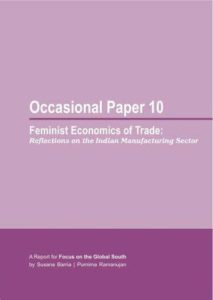 16/08/2011
Under: Deglobalisation, Publications, Trade and Investment

Using case studies from the manufacturing sector in India this paper aims to provide an understanding of the theoretical framework proposed by feminist economists on the process of economic liberalisation. By situating the effects of economic liberalisation on women and men vis-a-vis the linkages between patriarchy and political economy, this paper attempts to establish the point that if it is accepted that economic policies and consequently economic liberalisation affect sets of actors differently – women and men, upper and lower castes, religious minorities and majorities; and it is also accepted that such unequal impacts are due to unequal power relations, then the theoretical framework of analysis which is used for understanding the political economy and framing economic policies needs to capture and understand these inequalities and power relations. It is not merely enough to treat the symptoms of social inequalities, but the political economy and the framework of policy making itself need to be altered. A series of appendixes include detailed information on India’s economic liberalisation, beginning from the Structural Adjustment Programmes to the recent proliferation of bilateral and regional Free Trade Agreements, as the current tool of economic liberalisation, in order to make this document more accessible to readers new to the discussion on trade liberalisation.