Interrogating the Food and Agriculture Subsidy Regime of the WTO: An Indian Perspective 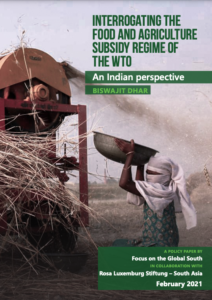 The global trade system established in 1948 by the General Agreement on Tariffs and Trade (GATT), the predecessor organization of the WTO, intentionally excluded agriculture from its jurisdiction. The exception, requested by the US, allowed member states to maintain support and protection policies for domestic agriculture.

However, by 1986, at the Uruguay Round negotiations, the GATT decided to change course and establish a market-oriented agricultural trading system, resulting in the 1995 adoption of the Agreement on Agriculture (AoA), which imposes disciplines on domestic agricultural subsidies.

This paper explores the AoA’s impact on the farming sectors of the US and the EU—the world’s largest providers of farm subsidies—as well as India. Whereas the US and EU have successfully maneuvered around the AoA’s disciplines in order to subsidise private agribusiness, the agreement constrains India’s ability to provide subsidised food grains to its vulnerable population.