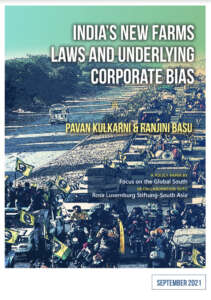 28/09/2021
Under: Food Sovereignty and Agroecology, India, The Commons

This report by Pavan Kulkarni and Ranjini Basu explores the various dimensions of the September 2020 Farm Law Reforms in India, and how they are a mis-fit for the realities of Indian agriculture.

Inspired by the example of US and Europe – whose agricultural structure is characterised by predominance of large land holdings over which mostly single variety of crops are grown in large quantities – the three farm acts are forced on India, where agriculture is characterised by small land holdings and multi-cropping. This structural feature mitigates against corporate driven agriculture, making it unviable. The government’s attempt to force these laws on India with a total disregard for the country’s agrarian reality, may have the dire consequence of destroying the existing infrastructure, to replace which few private alternatives may actually emerge. Rather than encouraging investment in production or construction of new infrastructure, the laws lay the groundwork for the corporate capture of existing infrastructure.