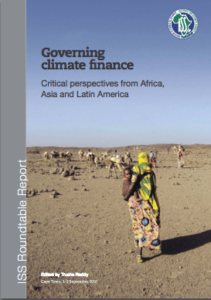 Climate finance is a key element of a global agreement to address the impacts of climate change. Billions of dollars will flow to developing countries and it is essential that this money goes to meeting the needs of those most vulnerable to these devastating impacts and is not lost to corruption and poor governance. It is also important to recognise that the amounts of funding, the number

of institutions involved and coherence in the global architecture will be meaningless without democratic governance of the funds at the local level. The hopes of vulnerable people in developing countries around the world are thus dependent on funding that is justly and effectively mobilised, managed and disbursed in national and sub-national contexts.

On the basis of these understandings, the Institute for Security Studies’ Corruption & Governance Programme embarked on a pilot project to monitor the governance of climate finance at the local level in 2010, with project activity support from the Hanns Seidel Foundation. One of the main activities of the ISS project was a two-day roundtable on climate finance from 1 to 2 September 2010. Civil society experts from Africa, Asia and Latin America participated and presented papers describing national and sub-national experiences with climate funds in their regions. This report is a compila- tion of their papers, which were finalised after the discussions at that meeting. It presents an approach that is grounded in the realities and experiences of funding arrangements across developing countries in the three regions studied. The conclusion reflects on some of the common findings of those studies.

The regions highlighted are most likely to receive a large share of climate finance and stand to face devastating climate change impacts. The report ex- amines how three funds, the Adaptation Fund, Clean

Development Mechanism (CDM) and the Reduced Emissions from Deforestation and Forest Degradation (REDD), their pilot programmes and general forest governance work in practice and what their intended or unintended effects are on recipient countries and local beneficiaries. The report also considers to what extent universal democratic principles of accountability, transparency, public participation, inclusiveness and social justice are taken into account when funds are applied in these contexts. Peculiar trends, like new

and different types of corruption concerns, are also raised by the study. Finally, the common experiences are translated into a normative approach detailing general priorities and principles for funding. Much of the information is anecdotal, or context specific, but common themes do emerge which are instructive for future policy making on climate finance governance. Further studies are encouraged for providing more depth and a range of views. A comparative review is also needed to match up our grounded development of priorities and principles with those that develop them using other environmental and ethical frameworks and legal conventions.

The Institute acknowledges with thanks the funding assistance of the Hanns Seidel Foundation and that of the governments of Norway, Sweden, Denmark and the Netherlands. Thanks are given to all the dedicated con- tributors to the report, whose backgrounds are detailed in the ‘About the Contributors’ section of this report. We also thank all those who assisted with the production of this report.

We hope that the findings of the study will further your understanding of the developing climate finance governance regime and the debates it introduces encour- age the just and effective consolidation of the regime.