Farmers Plight in their Own Words, an illustrated story (Hindi vers.) 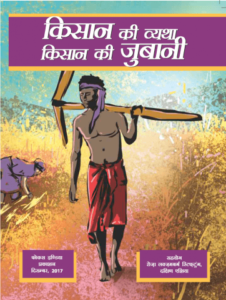 23/01/2018
Under: Food Sovereignty and Agroecology, Publications, The Commons

Agriculture has been the driving force for India’s economy. At one point farming was even considered to be one of the most respectable job an individual could have. However, with the shift from zero budget farming to the rapid commercialisation of agriculture, many farmers have found themselves displaced or stuck in a vicious circle of debt trap.

Hoping for a better life and to save themselves from the harassment of moneylenders, farmers prefer to sell their lands or just abandon them and move to cities, however, to find themselves stuck in yet another trap of unorganised labour. A better understanding of their current situation can be ascertained by comparing the past and present state of agriculture and the role of farmers in it.

This animation booklet presents stories of their struggle for survival in their own words.