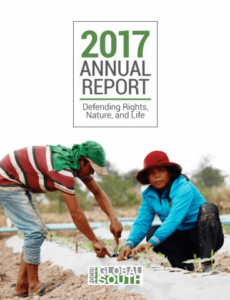 Guided by its overarching three-year workplan, Focus organized, conducted, and implemented its work in the context of two major challenges in Asia: the deepening of neoliberalism and the intensification of fascist and authoritarian rule in Asian states.
Deepening neoliberalism is marked by growing landlessness in South and Southeast Asia, even in countries such as the Philippines, which has been implementing a land distribution program for the last 30 years.
We see land-based conflict and food insecurity arising from corporate-led land grabbing, which is supported by economic programs and investment policies of Asian governments, and is resulting in public land being opened up to foreign investment.
Meanwhile, the destruction of lands, forests, water resources by extractive industries continues, and public services and sectors—such as health, agriculture, and food production—have been opened up to foreign investment and trade.
To suppress dissent, especially resistance to neoliberal economic and development programs, Asian governments have resorted to policies aimed at punishing, killing, and censoring certain populations and sectors of society, particularly the poor and the socially-politically disenfranchised, human rights and environmental defenders, workers, farmers, women, and children.
In each of the countries we operate in, repression of civil society and suppression of the freedom of expression have created even greater challenges for movements and communities seeking to assert their rights.
Grassroots communities, social movements, and civil society groups are being sustained to resist and push for alternatives, and Focus continues to be active at local, national, regional, and international arenas to strengthen and amplify these voices.
[Note: Updated PDF file. 08-10-2018]