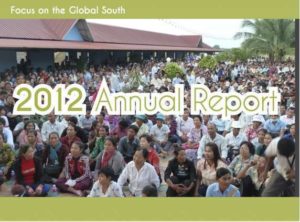 Focus on the Global South was able to complete a major organizational restructuring in 2012, a process which began in the last quarter of 2011. Despite the considerable administrative and programmatic limitations posed by the transition, we were able to continue making significant headway in our research and campaigning during the year, through our main thematic work areas of Defending the Commons (Land, Water & Forests); Trade & Investment; and Climate & Environmental Justice under a redefined program framework now called Whose New Asia. In this transition period, we were fortunate to have received support from our Board, donors, allies and former staff.

Continuing our emphasis on the social movements of Southeast and South Asia, Focus remains an activist think tank to connect local, national, regional and internatio- nal movements fighting against neoliberal globalization. Under the current Whose New Asia? program (2012-2014), this work is now concentrated on promoting and strengthening alternatives to address how the so-called New Asia, with the emerging economies of China and India and ASEAN moving towards an economic community, is dealing with the global financial and environmental crises.

While continuing our ground-level work with movements, NGOs and other allies in India, the Philippines, Thailand, and the Mekong region, Focus has also remained active in international and regional initiatives, with Focus staff playing significant roles at civil society mobilizations, specifically in the Asia Europe Meeting in Vientiane (the Asia Europe People’s Forum), the ASEAN Summit in Phnom Penh (ASEAN Grassroots Peoples Assembly), the UNFCCC Intercessional in Bangkok, and the Rio+20 UN Conference on Sustainable Development in Brazil.