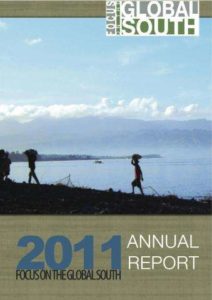 Year 2011 was the nal year of 2009 – 2011 program work plans. is report looks at the work of Focus on the Global South in the year just passed, but it also contextualizes this work as part of all e orts and initiatives during the three-year program cycle.

It is also worth noting that in the latter half of 2011, while Focus was working towards realizing its work plan and meeting the goals it had set, the organization was also undergoing a re-structuring process. By end of 2011, the re-structuring process resulted in a leaner organization which will now bear the task of implementing projects under a sharpened, more focused framework called “Whose New Asia?: Understanding the political, economic, social and ecological challenges of the New Asia; building resistances, alternatives and solidarity.” e re-structuring process was aimed not only at meeting challenges in organizational resources but more importantly at acquiring the ability to respond to the global economic crises and geopolitical developments.

In some ways, this report also serves as the conclusion of an important chapter in the organization’s history. Since its establishment in 1995, Focus has provided cutting edge analysis of global trends while working with social movements to create real change atthe ground. Recent years have shown signi cant changes in the international order, as economic crises jolted the “old” centres of capital in Europe and the US, while Asia—led by China and India—is being touted as the new engine of the global economic system, ful lling the dual roles of producer and consumer. Much has already been written about the “winners” in this “New Asia” and there have also been critical assessments of the social and environmental impacts of resource-intensive economic growth. Much less, however, is understood about how these developments are seen and experienced “from below” in China, India and across the region.

More importantly, as the social and ecological costs of this development model rise, the question of how Asia’s booming economies can shi from their present trajectoryto a more equitable, ecological and democratic pathhas become all the more pressing. ese questions areimportant not only for ensuring social development and democracy, but because the ecosystems and resourcesunderpinning the livelihoods of the vast majority of peoples in Asia are being destroyed by “business- as-usual” economicgrowth.

ese have been the contexts in which Focus worked to accomplish its 2011 plan, including the re-structuring process.