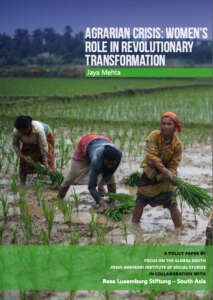 Author: Jaya Mehta
The author is a Delhi based researcher with the Joshi-Adhikari Institute of Social Studies.

This timely report by agriculture economist Jaya Mehta begins with an analysis of the 2020 agricultural reforms in India and the role of women in the historic and successful struggle that led to the Government of India withdrawing the controversial laws in December 2021. The report then elaborates on some of the key weak links in Indian agri- culture that have been exacerbated during the three-decade neoliberal reform period. These include issues such as land grabs, suicides by debt ridden farmers, migration and the skewed distribution of agricultural land. The report underlines the importance of restructuring land-labour relations in Indian agriculture from a gender perspective and points to important lessons from collective farming in the southern state of Kerala. Mehta asserts that only a strong women’s movement to collectivise the economic base can break the current impasse and assert the rights of women over their labour and land.

This report is published by Focus on the Global South with support from the Rosa Luxemburg Stiftung — South Asia office.