After COVID-19: Can we tame global finance? 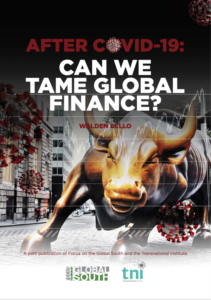 The Covid-19 pandemic has illustrated how irrational the financial sector has become. Even as the real economy has ground to a halt, stock prices have gyrated wildly, first collapsing, then shooting up. Even as hundreds of millions suffer, big tech corporations like Apple are gaining in value and rich shareholders are making money hand over fist. Covid 19 has underlined how governments must act to tame global finance and align it with society’s priorities.

This report starts by showing how, prior to the pandemic, most of the reforms that were needed to prevent a repetition of the 2008-2009 financial crisis were not in place. For instance, investment instruments such as derivatives that had played such a key role in the 2008-2009 crisis, were still being traded. The “too big to fail” conundrum had, in fact, become worse, with more assets being concentrated in the top tier banks than before the crisis. To complicate things, there were new destabilizing elements that were not present during the Global Financial Crisis, the most important of which was China’s overheated financial sector.

The report then proceeds to list the 10 necessary reforms, giving in detail the reasons for each of them. The reforms, it notes, are changes that are non-neoliberal but they can be accommodated within a reformed capitalist system, though progressive alliances will need to be formed to secure them. The proposed reforms are:

The last section raises the question whether the reforms, once secured, can be maintained. It voices the concern that the incessant drive towards profitability constitutes a strong counterforce against a managed Keynesian solution centered on sustaining demand. It also expresses skepticism about the fashionable theory that growth can be delinked from increasing C02 emissions, thus making managed growth compatible with decarbonization. It poses the question: Can the world continue to avoid moving to a post-capitalist economic system if the twin goals of equality and reversing climate change are to be achieved?