On Chirstmas Eve, Farmers’ appeal to government: Defend us from landowners’ harassments 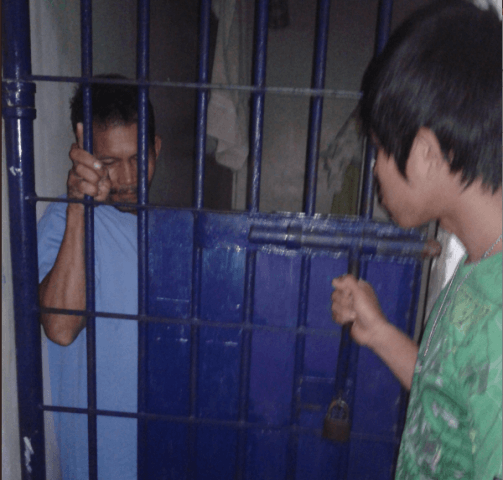 Bgy. Sumalo, Hermosa, Bataan – Jose Laysa and his wife just wanted to prepare a simple Christmas meal cooked in coconut milk.  Jose gathered 3 coconuts from the farm he has been tilling for 30 years and this act ended him in prison.  Currently, Jose has been released but threat of imprisonment remains. The farmers of Save Agrarian Reform Alliance (SARA) appeal to government — Defend us from landowners’ harassment, fulfill the agrarian reform mandate now.

Jose Laysa, a forty-seven year old farmer, who was identified as a potential agrarian reform beneficiary by the Department of Agrarian Reform (DAR) in the 214 hectare property was arrested by the security guards of Riverforest Development Corporation, owned by James Litton, et. al.  Litton is claiming the 214 hectares as his own, which was initially subjected to a voluntary-offer-to-sell (VOS) by Litton in 1989. VOS is a scheme under the Comprehensive Agrarian Reform Program (CARP), in which the landowners voluntarily offers to sell his land to government for land distribution. Later on, Litton withdrew the VOS and filed for land use conversion.

“Panggata lang sana sa uulamin namin ngayong Pasko dahil wala naman kaming perang pambili dahil pinagbabawalan kaming makapagsaka ng mga Litton”, lamented the wife of Jose Laysa. (We will use the coconut milk for our meals this Christmas because we don’t have money to buy food as Litton has encroached on our farms.)

Laysa was accompanied by his 17-year old son while harvesting the coconuts. They were then approached by the security guards of Riverforest Development Corporation and accused of theft and trespassing. Laysa resisted and told the security guards, “ Paano ako magnanakaw sa sarili kong tanim at sa lupang aking binubungkal?” (How can I steal from my own farm that I’m tilling?)

At this point, one of the guards pointed his gun and brought Laysa to their barracks. Laysa was later brought to the Hermosa Police Station.

The controversial landholding is being petitioned by the farmers of Sumalo for CARP coverage since the Littons violated all the Rules on Conversion, specifically the non-development of the land or conversion within the five year period as provided in RA 9700 or the CARP Extension with Reforms Law.

“They do not have a conversion order, conversion plan and worse they maliciously and willfully violated the Permanent Injunction Order issued by the Regional Trial Court of Bataan (Branch 5), which clearly stated that they can only construct fences around the land but they fenced even our houses and farm lots.”, said Barangay Captain Rolando Martinez, a supporter of the farmers’ cause.

Last Dec. 21, in a dialogue, DAR Secretary Virgilio “Gil” delos Reyes told them that he cannot grant the request of the Sumalo farmers as for him, the issue is outside of his jurisdiction. The farmers were told to seek relief in regular courts.

“This is outright abandonment by the Secretary of his mandate under CARP. The petition for CARP coverage of the Sumalo farmers has been languishing in his office for more than two years now. We cannot understand why he said that the case is outside his jurisdiction, when there is a clear legal basis for our claims.”, said Martinez, who was at the dialogue with Sec. delos Reyes.

The Sumalo farmers are worried that that there may be truth to the claims of a certain Retired Colonel Renato R. Rapisura, the administration manager of the Riverforest Development Corporation, who uttered “Wala na kayong magagawa, amin na si delos Reyes”. (You cannot do anything, we have delos Reyes on our side.)

“We hope that Sec. delos Reyes has not sold himself to the Littons and instead heed our demands. If delos Reyes delivers on his agrarian reform mandate, this will be the best Christmas gift for us.”, added Martinez.

The Sumalo farmers are seeking the help of almost anyone from government and civil society. They have already sought an audience with the Commissioner of Human Rights, Loretta Rosales, CBCP-NASSA and Representatives in the House of Representatives; hoping that the landowners’ harassments and intimidations can finally stop.