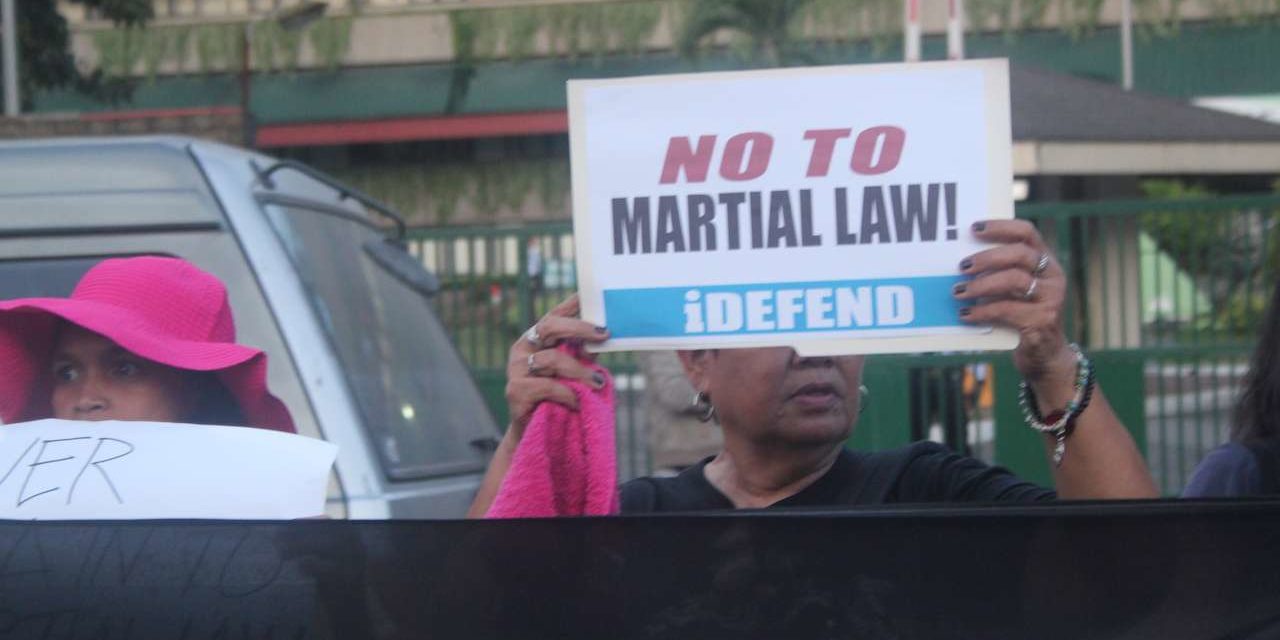 The imposition of Martial Law in Mindanao carries with it the probability of Martial Law being imposed in the entire Philippines. With President Duterte threatening to put the Visayas and Luzon under Martial Law (he had made similar threats about Mindanao before actually declaring it on May 23 while on a state visit in Russia), there is no room for complacency, especially as far human rights defenders, leftist activists, and resistance and social movements are concerned. He has said that if even a single ISIS member is spotted in Metro Manila, he will expand the coverage of Martial Law (ML).

There should have been no qualification as to who should be concerned about ML being declared in the whole country; most are also at the forefront of the opposition now to ML in Mindanao, as the Marawi crisis has not warranted such response. The military has long been part of the island’s landscape, fighting rebellion and terrorism. Militarism has never sufficiently arrested conflicts and violence, even terrorism, and should be scowled upon. On the contrary, this response has often spawned more violence, especially directed against civilian.

For us in the human rights movement as well as ‘70s and 80s activists, it has been a quandary why the public couldn’t be united in opposing ML. It is a reality though that there are contending views on ML particularly around its necessity in addressing conflicts in Mindanao. But our history with ML under the Marcos regime should have generated a consciousness that would resist this, even among the younger generations who have not experienced and witnessed the horrors of that era. There has been a failure in our collective memory-making here. It certainly didn’t help that the liberal democrats who belonged to or are allied with the oligarchy have glossed over this reckoning with the past to protect their own political and economic interests.

With the ghosts of history being resurrected by the current ML rule in Mindanao, we can’t help but use the past and its lessons as lens for current events; and compare Marcos with Duterte.

Both Marcos and Duterte are popular, charismatic leaders. Marcos used to be the epitome of a firebrand, captivating public speaker until that time when even his eloquence could no longer cover up the horrifying realities under his dictatorship; when the vision of a “new society” had turned into a nightmare. Duterte has been able to capture the adulation of a sizeable public with his misogynist language and vitriol.  The base of Duterte’s popular support is also the lower to middle class, the same section of society that supported Marcos in the early years of his rule (and there would be the section of this population who would continue to remember him as a well-meaning leader). Their main argument, which sells to the middle class’ penchant for order and security: if one isn’t involved in illegal activity, one doesn’t to be afraid of ML. Marcos, however, demonized activists and leftists so that in the mind of the public, they caused disorder and that ML necessarily targeted them.

Under the Duterte regime, those who have something to be afraid is the cabal of human rights defenders, drug addicts (who are not human); and the ‘extremists’.

Marcos used the issue of peace and security as well as social stability when he declared ML in 1972; his bogeyman at that time were the Communists or the so-called imminent danger to the nation’s existence from Communist insurgency. This had held ground especially with the middle class who had an aversion for unrest, criminality, unruly behavior.  The poor of course went daily unrest caused by poverty and resulting from their lack of or inadequate social, economic, and political agency.

Duterte’s reason—excuse to deepen authoritarian rule—for declaring ML in Mindanao is terrorism, which isn’t a recent phenomenon, and in fact has long added to the complexity of the conflicts in the island. It is likely that he will use this again to justify ML in the whole country. For us human rights defenders, there should be no prevarication when it comes to our position towards ML whether the crisis is fabricated, perceived, or real. In the past and as it is now, human rights is the first casualty under ML, especially under this president who is its avowed enemy.

History is also now being used to dredge up distortions and biases that the peace movements in Mindanao have painstakingly worked to diminish, if not to end. Mabel Carumba, a peace activist from the island, has spoken about how with Martial Law, the Christian-Muslim divide has been immediately played up by various interests, thus weakening efforts in the past to use dialogue and traditional means of resolving conflict.  These means might not have totally eradicated the roots of conflict, but there had been success stories, according to Carumba.

Memory’s frailty often makes it unreliable, but in recounting history and passing on to the younger generations the narratives that comprise it, personal witnessing and reminiscences are very powerful. Historians though will caution us that collective memory is not just about personal experiences; the process of collective-memory making involves deepening our understanding and appreciation of historical events or periods through formal and other means of education. Beyond personal memory, collective memory comes also from all the documents, documentation, narratives of the period being remembered and judged. In historical time, 20 – 30 years would be insufficient for the collective memory-making process and thus would render historical interpretation still very contentious. The declaration of ML under Marcos will be 45 years old this year. This puts us at a critical juncture when it has become more urgent to fight revisionism and the interests behind authoritarian rule in the past who have been emboldened again by the Duterte government.

According to historians, after 50 years would be the minimum time needed to evaluate historical events—and that this role is not only for those who lived through these events but for those who have come after.#

*This article is based on the reflections I shared with members of #BlockMarcos Movement during their strategy meeting.