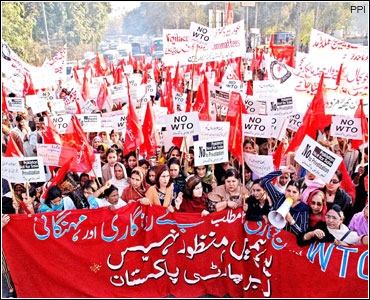 Thousands of Labour Party Pakistan’s activists demonstrated today (Tuesday) against the imperialist onslaught of privatization and WTO. The rally participated by trade union activists and political workers ,started from Shimla Hill and culminated at Lahore Station all the way from Abbot Road and Mcleod Road.

In a statement on the occasion, the LPP chairperson Nisar Shah and general secretary Farooq Tariq said that the World Trade Organization (WTO) negotiations are dominated by rich countries and their corporate lobbying groups thus the process of negotiations is not producing any fruitful results for developing countries.

Call to Action: Deal a decisive blow to Neoliberalism. End the WTO and Stop the new wave of Free Trade Agreements. The time is now for Economic Justice!