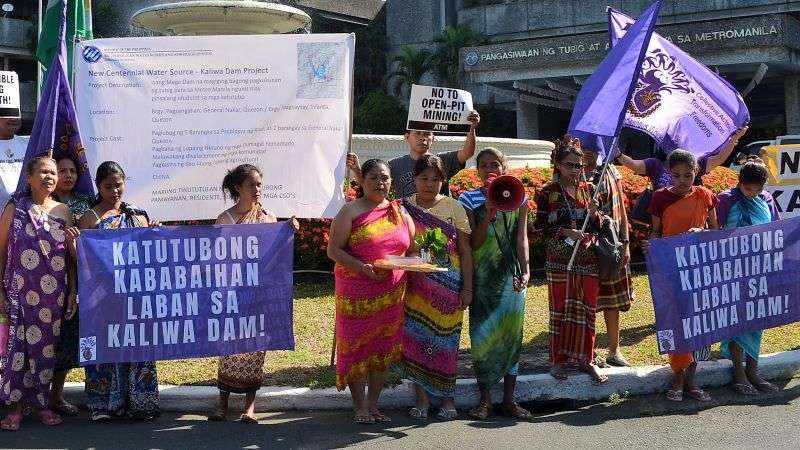 8 March 2019, Quezon City – This is a line in the song sang in Dumagat, translated into Filipino, by the indigenous women in front of the building of Metro Manila Water Sewerage System (MWSS) early this morning, as offering was made by a Dumagat woman leader.

To mark today’s celebration of the International Women’s Day, indigenous women led by Dumagat women, held a short symbolic action to express their opposition to the Kaliwa Dam project of MWSS. The offering of soil and mama (betel nut), speaks of their connection to the land, and their desire for peace, and harmony with nature.

The Kaliwa Dam which costs PhP 18.724 Billion, will be developed to meet the increasing water demand by consumers in Metro Manila. The construction funds will come from a loan with China.

According to Judy A. Pasimio of LILAK (Purple Action for Indigenous Women’s Rights), this dam project is part of the Build, Build, Build Program of the Duterte administration. “Without regard to human rights, and the adverse impact on human lives, especially those of indigenous peoples, this project becomes part of Duterte’s Kill, Kill, Kill program – kill the environment, kill the food sources, kill the communities’ way of life.”

“As we celebrate International Women’s Day today, we celebrate the courage of indigenous women who continue to fight for their rights, for the environment, and for a better future, not just for their communities, but for us all,” adds Ms. Pasimio.