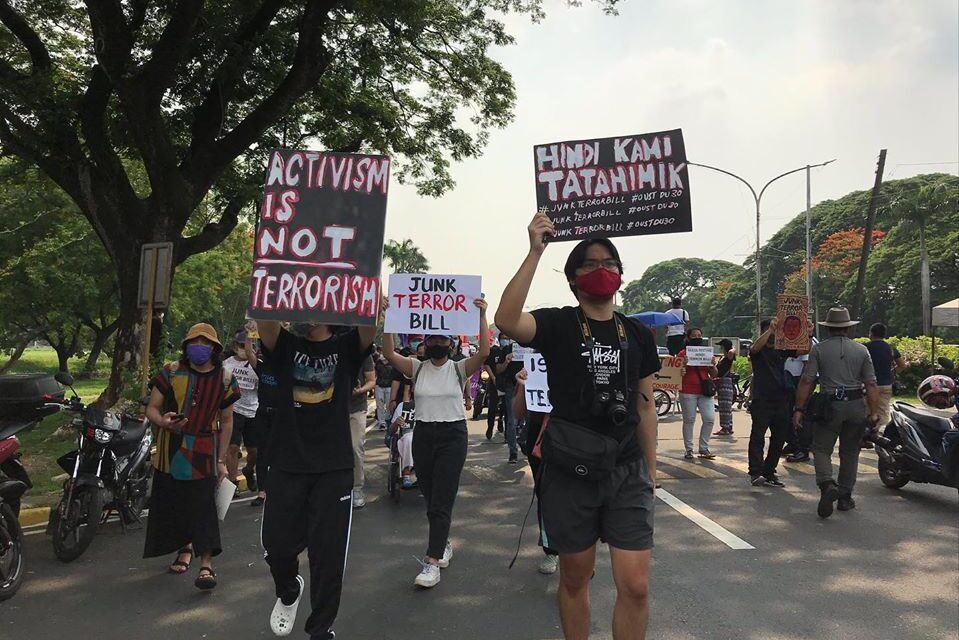 Youth activists hit the streets wearing face masks and defying the government lockdown to protest the imminent passage of a new anti-terror law in the Philippines. University of the Philippines Campus in Quezon City. Photo courtesy of Susan Corpuz. 2020 June 4.

Focus on the Global South joins other progressive groups and movements in strongly opposing the imminent passage of a new anti-terrorism bill in the Philippines. That the proposed law was railroaded in both Houses of Congress—with Duterte himself certifying the bill as urgent—as millions of Filipinos continue to grapple with the long term impacts of the COVID-19 global pandemic speaks of the despotic and authoritarian character of this administration. The normalization of violence, the criminalisation of dissent, the demonisation of human rights defenders and now the institutionalization of the State’s assault on human rights and fundamental freedoms will forever be etched in our collective consciousness as the enduring legacy of the Duterte regime.

The fear that the law will be used to designate protests and other legitimate expressions of dissent and civil disobedience in the exercise of our rights as terrorist acts is not without basis. For decades, law enforcers themselves have taken an active role in harassing and killing progressive groups under the guise of maintaining peace and order. Under the Duterte administration, they have taken an even more aggressive stance by assuming what is supposedly the role of the judiciary to determine who is guilty of transgressing the law and imposing the penalties for such. Their actions have been enabled by the Duterte administration, which has shown its capacity and willingness to exert violence against the people.

It is a government at war with its own citizens. The casualties from its failed “Oplan Tokhang” or anti-illegal drugs campaign, estimated at 30,000 people, continue to rise; its pro-corporate economic agenda continues to threaten the lives and livelihoods of farmers, fishers, workers, indigenous peoples, and women; and its inefficient, militaristic, and heavy-handed response to the COVID-19 public health emergency has exacerbated the health, political, economic, social, and cultural impacts of the crisis.

We are deeply concerned that the passage of this new anti-terror law at a time when the whole country and the world is dealing with a global pandemic will lead to further crackdown on human rights defenders exercising their constitutionally-guaranteed rights. The bill contains various alarming provisions that are unconstitutional and detrimental to civil and political rights.

First among these is the law’s vague definition of what constitutes acts of terrorism. In particular, the designation of “inciting to commit terrorism” as a crime and its broad definition can serve as a pretext for abuse by being used to target critiques and dissenters, thereby infringing upon our constitutional right to free speech according to human rights groups.

Second, the proposed measure will create an Anti-Terror Council (ATC), which will have the power to determine who are terrorists and to order their arrest and detention. Composed of unelected cabinet officials from the executive branch, the ATC unconstitutionally takes away powers from the judiciary and functions otherwise reserved for courts. The provision of such power to the ATC becomes an even more cause of concern when we look at the persons who will be designated to be part of the council under this administration [i] most of whom have been known to engage in red-tagging. In the report of the United Nations High Commissioner for Human Rights on the situation of human rights in the Philippines released today, it noted “the phenomenon of red-tagging—labelling individuals or groups (including human rights defenders and NGOs) as communists and terrorists—has posed a serious threat to civil society and freedom of expression.”[ii]

Third, suspected terrorists can be detained without a warrant of arrest for 14 days, extendable to ten more days. Such provision according to the Alternative Law Groups, a coalition of 23 legal resource NGOs, leaves citizens prone to abuse, deprives them of their right to liberty, and reinforces the tendency of abusive authorities to arrest and detain persons based on mere suspicions.

Lastly, the bill allows the police and military to place suspected terrorists under broadened surveillance for a maximum of 90 days. Information that law enforcers are authorized to access include private communications and messages in any form, kind, or nature. Because of the unbridled access to such information permitted under the law, data that may not necessarily be relevant to the investigation may also be included for political persecution, thereby infringing on one’s right to privacy.

The facts are staring us in the face. Duterte has led these consistent attacks against democratic governance: the continued incommunicado incarceration of opposition Senator Leila de Lima on trumped-up charges, the quo warranto removal of Chief Justice Maria Lourdes Sereno, the attacks against critical media and press freedom, the assault against grassroots communities pushing back destructive projects, and the weaponization of the law against pro-democracy groups—as indicated by the enforcement of Executive Order (EO) No. 70, which has been used to justify attacks on activists under the guise of “ending local communist armed conflict,” and now the railroading of the anti-terrorism bill. The proposed legislation is even more alarming in conjunction with the approval of the $2 billion arms sale by the US Congress and State Department to the Philippines as well as the suspension of the government’s earlier decision to terminate the 1999 Visiting Forces Agreement (VFA). Combined with the anti-terror bill, the continued expansion of US military support and intervention in the country will only further empower state forces in their crackdown on pro-democracy forces. The anti-terror law is another piece in the Duterte administration’s arsenal in its war against the Filipino people.

We stand with other progressive groups and the majority of Filipinos in the continuing assertion of people’s rights and join the efforts to push back the attacks against our democratic rights and fundamental freedoms.# 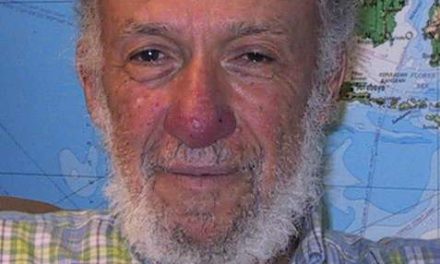