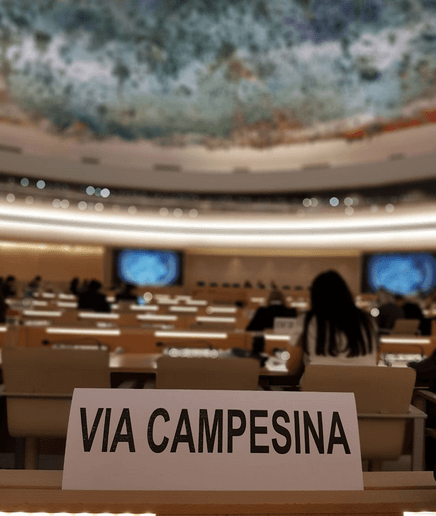 The initiative of La Via Campesina, largest peasant movement on earth comprising more than 182 organizations from 81 countries, for a United Nation Declaration on Rights of Peasants and Other People Working in Rural areas will soon be a reality. At the conclusion of 5th Session of the United Nations Open-Ended International Working Group (OEIWG) on the rights of peasants and other people working in rural areas, held in Geneva, April 9-13, the process for finalizing the declaration this year was further revitalized. The Declaration will create an international human rights instrument, within the United Nations Human Rights Council (UNHCR), for the promotion and protection of peasant rights. It will also draw attention to the threats and discrimination peasants and people involved in small-scale food production across the world suffer from. Through this Declaration, millions of peasants around the world will also be able to reclaim their rights to feed their families and communities, as it recognizes the fundamental role of small-scale food producers while also offering them tangible prospects for decent working and living conditions, consequently making this world a safer place for peasants.

The motive for evolving the UN Declaration on Rights of Peasants and Other People Working in Rural Areas has been exquisitely illustrated in the Preamble of its last revised draft. (A/HRC/WG.15/5/2 of 12th February 2018). It says:

On April 16th, the LVC and other social movements issued a Joint Statement from Geneva on the outcome of the 5th Session of the OEIWG, which says that “it appears clear that, aside little exceptions that we all know, nobody denies the need for adopting such Declaration. This process is a demonstration of the effort to continue advancing the pluriculturality of the human rights system.” It further says, “after seventeen years of work, effort, and dedication, throughout the world, this process has made our movement and struggle stronger than ever. We are always ready to take our roles in terms of fighting for our human rights. The legal gaps with regard to the protection of peasants’ rights and of other people working in rural areas at the international human rights level, need to be filled without further delay. This is our Declaration…all peasants and other people working in rural areas around the world strongly identify themselves with the content of this Declaration, which will be an instrument to restore and dignify our status in society, to recognize and protect our rights, and to guarantee conflict resolution with dialogue and in peaceful manner”.

In the opening of the 5th Session, April 9th, the Deputy High Commissioner for Human Rights said in her opening remarks that “over five years of diligent effort, the drafting had been built on existing international standards relevant to the rights of peasants and other people working in rural areas, as well as FAO Principles and several Voluntary Guidelines.” These remarks from the Deputy High Commissioner transmitted a sense of urgency to the Working Group to finalize its work on the draft declaration to address the gap in protection for more than a billion people, who face discrimination and other challenges. She also said that “the situation is aggravated by globalization, free trade agreements, and patents over seeds which erode the ability of small farmers, as well as climate change which affects particularly those who depend on the land.”

Other civil society groups that were represented in the 5th session were the International Union of Food, Agricultural, Hotel, Restaurant, Catering, Tobacco and Allied Workers’ Association (IUF), World Forum of Fisher Peoples (WFFP), Federation of Rural Adult Catholic Movement (FIMARC), International Indian Treaty Council (IITC), Association Centre Europe-Tiers Monde (CETIM), FIAN International, International Association of Democratic Lawyers (IADL), Bread for All, among others. The experts who were assigned certain articles or groups of articles played a key role in explaining the importance of various articles and why these articles must be retained in the current draft, stressing that any dilution or deletion of text of these articles would compromise the spirit of those articles and would go against the current human rights obligations and ultimately affect the protection of the rights of peasants and other people working in rural areas.

At the end of the final meeting of the of the five-day session on April 13th, the Chair-Rapporteur concluded that a revised draft will be prepared by the Chair-Rapporteur on the basis of the different proposals and views expressed during the fifth session of the working group, and encouraged States, civil society organizations, and relevant stakeholders to send their written textual proposals and contributions to the draft declaration, as presented during the fifth session, before 20 April. During the negotiations, the Plurinational State of Bolivia and especially Chair-Rapporteur played a constructive role with the sole intention making the Declarations a reality as soon as possible.

The Chair-Rapporteur will also prepare a final draft to be submitted to the Human Rights Council for its adoption, in fulfillment of the mandate of the working group as stated in paragraph one of Resolution 19/21 and subsequent resolutions. The draft Declaration will come up for vote at the Human Rights Council in June 2018 and it is hope that the whole process will finally be concluded with a vote on the draft Declaration at the UN General Assembly in September this year. The period from now till June has been deemed crucial for mobilizing the member states of UNHCR towards voting for this historic declaration.

If this Declaration gets adopted by end of this year, according to La Via Campesina this will be a wonderful gift from the World Community of United Nations in its 25th year (LVC was formally established in 1993) of its long struggle for the protection of peasants’ rights and millions of peasants, indigenous peoples, pastoralists, fisher folk and rural workers, and rural women.

Afsar Jafri can be contacted at: [email protected] 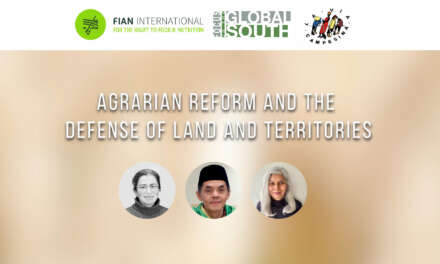 The Armadillo and the Chameleon: a cautionary tale