“Deglobalization”: French Credit Focus on the Global South Founder with Concept at Heart of French Electoral Debate: Is France on Course to Bid Adieu to Globalization? 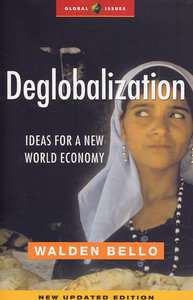 PARIS: As France gears up for next year’s presidential election, one word dominates the headlines – démondialisation. Although France is not about to stop the world and get off, the emotional debate over globalization could bring policy changes. Globalization has never been a popular concept in France, even though French companies and consumers benefit from global interconnectedness. With the effect of the 2008 financial crisis still biting and emerging economies like China casting long shadows, globalization is more unpopular than ever. The call for “deglobalizing” has begun to spread out from fringe parties into mainstream political parties.

The man who personifies the word “deglobalization” is Arnaud Montebourg, 48, a brilliant lawyer, a Socialist Party (PS) member of the French Parliament, and candidate in his party’s primaries for the 2012 presidential election.

He most likely stands no chance of winning candidacy against heavyweight personalities like Mayor of Lille Martine Aubry or former PS First Secretary François Hollande. But he hopes to influence the debate enough to become a key member of the new administration in case of a left-wing victory in 2012.

Montebourg’s latest book is called Votez pour la Démondialisation! – Vote for Deglobalization! – a lawyer’s plea for France to step back from its embrace of the open-trade approach of the past two decades and promote European-based protectionism to save itself from the wild competition of the global economy.

In strong words, he accuses the world of having lost its way. Globalization, Montebourg claims, “has created unemployed in the North and increased the number of quasi-slaves in the South, destroying natural resources everywhereand taking away from people their hard-won right to self-determination.” He describes promoters of globalization as “fundamentalists of free-trade,” who have made the opening of trade barriers a “new religion.”

Montebourg is no radical spokesman. With him, the cry for deglobalization has moved towards mainstream politics. He remained within the ranks of the old PS when maverick politicians such as Jean-Luc Melenchon abandoned it, to create a new party left of PS, following a series of electoral defeats. The effort emulates Germany’s Die Linke, an alliance that includes remains of the old communist party and disenchanted former social-democrats who criticize the party’s support for ultraliberal reforms.

This is no surprise. The dividing line is not primarily between left and right as in so many issues in France. The fracture is between nationalist and continental interests, as it was in 2005, when left-wing and right-wing joined forces to create an overall majority in France to reject the European Constitutional Treaty, with long-lasting consequences.

Montebourg points out that he is the only PS candidate who actually opposed the treaty. His rivals who supported the treaty were defeated.

In many ways, it’s the same battle all over again, but with 2012 being a presidential election and not a referendum, the answer is unlikely to be the same. Referendums call for straight “yes” or “no” answers to a question, whereas a presidential election encompasses a  range of issues, including the economic environment and the personality of candidates. President Nicolas Sarkozy’s unpopularity will be a factor.

Why is globalization so unpopular in France? Sure, while concern is not limited to the French, the issue takes on more dramatic overtones in France. The country both benefited and suffered from the open-door policies of the past two decades. Some French companies have become global leaders in their sectors, and France has attracted more than its share of foreign investment, thanks to great infrastructure and perfect location in the heart of Europe creating 2 million jobs.

At the same time, the country has lost millions of jobs to the emerging economies of eastern and central Europe and farther away to China and other low-wage economies with no social protections. And France has not developed alternative sources of jobs and wealth, finding itself, like many European economies, with a crisis of structural youth unemployment.

Big companies and their shareholders benefit whilst salary-earning workers and out-of-work youth suffer. And globalization has become the easy culprit.

“Deglobalization” advocates offer an easy answer: Erect new barriers at the gates of Europe, based on social and environmental criteria, to protect the continent’s economic model. They know Germany, Europe’s number one economy and a successful global player, will not buy it, and therefore advocate, as Montebourg does in his book, a redesigned strategic alliance with Germany.

Le Pen, who has no real ambition at this stage to enter office, carries the idea further, as she advocates an exit by France from the euro and erection of barriers at France’s borders. Her plan, a one-country-versus-all approach, makes no economic sense, but carries strong nationalistic and emotional appeal.

Eruption of the deglobalization issue has raised a heated debate in France. Some analysts compare it to the Maginot Line policy of the 1930s, when the French army built a line of defensive positions facing Germany that didn’t prevent fast and total defeat once war broke out.

Zaki Laïdi, a researcher at Sciences Po, the prestigious institute of political studies in Paris, pointed out in Le Monde that the integration of world economies make it absurd today to erect trade barriers, as no product, be it a European Airbus plane or a US-designed iPhone can be attributed to a single country anymore.

But rational arguments are purely defensive. They will not convince voters in 2012 that mainstream politicians have an answer to the crisis confronting French and other European economies. Sarkozy’s current unpopularity is both due to his controversial personality and style, but also to his failed promises of growth and jobs made in 2007.

His future left-wing opponents of 2012 offer similar promises promise of a growth-based economic recovery, without providing the key to this growth in a world where jobs, innovation, markets, have moved elsewhere. Their support for more regulation remains unconvincing, especially after the lessons of the financial crisis of 2008 weren’t followed by concrete actions.

The powerful impact of the apostles of deglobalization is to force politicians to work harder on their answers. Marine Aubry and François Hollande, the two main PS candidates for 2012, both supporters of a regulated free-market, haven’t formulated very innovative proposals for reversing France away from its dead end. Aubry’s promise of justice in implementing the necessary sacrifices is not exciting.

The utopia of démondialisation is all the more appealing as Montebourg points out that it’s not a rich-man’s dream of keeping the poor at bay, crediting Walden Bello, the Princeton-educated Filipino writer, politician and a man of the South for the concept.

To avoid an upset, as in 2005 when rejection of the European constitutional referendum took many by surprise, mainstream socialist candidates must formulate more convincing answers to the real questions raised by the deglobalization advocates. If they don’t, they’ll find a sizable share of the French electorate ready to reject global interconnectedness.