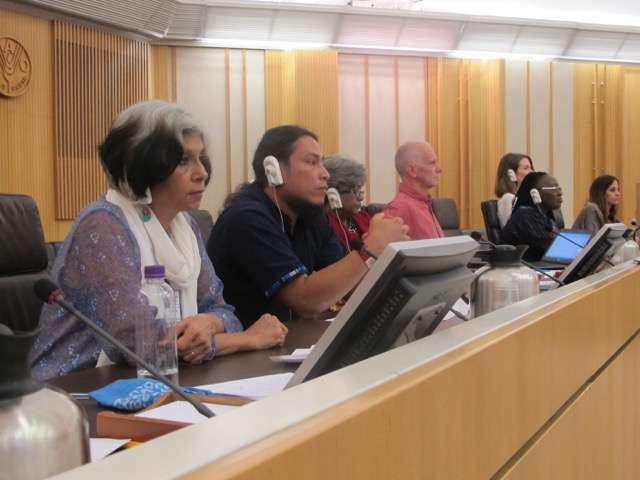 Across Asia, we are seeing the repression, denial, abuse and violation of rights of peoples and communities through criminalization, intimidation, disappearances, violence, and even murder.

The most direct and frequent targets of criminalization and violent trends are community and labor organisers; grassroots activists; small-scale food producers, their movements and organisations, and lawyers, students, journalists, activists, and organisations who support frontline communities and social movements.

Governments, state institutions such as the police and military, corporations, non-state actors such as militia and private security, and different social groups and economic classes, are key actors in criminalization and rights repression processes as both perpetrators and supporters. We are witnessing the entrenchment of a powerful nexus of political and business interests, and increased synergy between capitalism, extractivism, and political repression, packaged and presented as “development.” Also, class dimensions are important factors in enabling and strengthening this nexus.

Narratives of economic growth, progress, nation building, national security, social stability, peace, reconciliation, and even happiness are used as justifications by governments and their societal supporters to silence dissent and opposition. Protests against economic exploitation are often framed as political crimes. Those who resist or even speak out against land grabbing, deforestation, mining, dams, racially or religiously motivated violence, rape and sexual abuse of women, human rights violations and social-cultural injustice, can be branded as anti-national, dissidents, and threats to national security.

Corporations are increasingly using multi-stakeholder (MSH) spaces to convince civil society organisations (CSOs) to support their so called “win-win” strategies, offering financial and other incentives through Corporate Social Responsibility (CSR), and publicly distancing themselves from repression, violence, and criminalization. Many CSOs that participate in these spaces/processes enter into partnerships with corporations and donors, tacitly supporting corporations and enlarging their spheres of influence. Space is certainly not shrinking for these CSOs. At the same time, there is no real change in the operational practices of corporations and no real accountability on their part in human rights abuses. Instead, corporations and capital become more powerful because they get CSO support, while challenges to corporate captures of resources by grassroots peoples and social movements are undermined.

Criminalization generally happens through different legal and judicial means. Most common are changing existing laws/decrees, or making new laws/decrees that make it illegal for people/communities to organize, protest, march, demonstrate, form associations and organizations, live and practice traditional livelihoods, and critique public policies, corporate operations. Courts and judicial systems are also manipulated so that people facing repression, threats ,and violence do not get protection or justice.

Where legal, judicial, and administrative mechanisms are ineffective, those in power resort to direct threats, violence, enforced disappearance, extra judicial killings (EJKs), and murder through the military, para-military, police, vigilante mobs, and private contractors.  Most times, perpetrators go free because of their association with people in power.  Even when the actual perpetrators who shoot the gun or hold the knife are caught, those that masterminded and ordered the attacks remain virtually untouchable; they remain free to plan, order more violence, and perpetuate threats and criminalization.

In Thailand, communities living in forest areas are being sued by the government for causing climate change. In Cambodia, a new law severely restricts the rights of local communities, workers, and activists to organize.  In India, Thailand, Cambodia, government officials, corporations and business tycoons sue CSOs, journalists, and even academics for ‘defamation’ and spreading false news if they are publicly challenged or criticized. In India, Pakistan, Philippines and Cambodia, communities resisting land grabbing are harassed and evicted, often violently.  In the Philippines, the so-called “war against drugs” has become a war against the poor and rights defenders, as well as opportunism for those with power to eliminate people they perceive as threats to their interests.

At a broader level, corporate interests are assured through investor protection clauses in bilateral and regional investment agreements or economic partnership agreements. Corporations covered by these agreements can seek legal recourse through Investor-State Dispute Settlement or other arbitration mechanisms. However, such protections are not available for local communities and populations whose own investments and livelihoods are destroyed by corporate investments.

Criminalization is closely tied to occupation and militarization of lands and territories, the imposition of martial law, and the use of national emergency measures, national security legislation and anti-terrorism laws.  In such situations, usual legal safeguards for people are suspended, and those who defend human rights are presented as threats to national security and denied due legal process. If people are identified by the state as security threats, they can be held for months and years without contact with their families and access to lawyers, and are vulnerable to mental and physical torture.

Possible strategies to address these trends

End the impunity of perpetrators.  Criminalization, violence, repression, extra-judicial killings, and murder are made possible by state and non-state perpetrators acting together with the impunity of political and financial power. This impunity must be ended. We must join hands across nations, societies, political affiliations, and classes to challenge and end state, non-state, and corporate impunity. Institutions, structures, and systems of justice must be reclaimed by people to actually deliver justice and protection for everyone, especially those who are vulnerable and facing repression; they should not be allowed to be manipulated by those with wealth and political power.

Build public support against criminalization and violence trends. Again, it does not matter which social, religious, or economic group we belong to: violence, rape, assault, abuse of power, repression, etc. are simply not acceptable. The assurance and protection of the rights of people and communities are fundamental to our vision—there is no negotiation on this point.

Put faces and names to victims and to the perpetrators: the reality of this violence and repression, and the dangerous impunity of perpetrators must come home to all of us, and push us to acknowledge that each person and life are important. Perpetrators must be held legally accountable whether they are state agencies, militias, private security, elites or corporations, and whether they fire the guns, order the killings, bribe officials or grab lands/resources.  The roles of corporations in the escalation of assaults on the rights of peoples and communities must be made visible; their hands are not clean and they must be held legally accountable.

Monitor and challenge how conventional and social media are being used by the state, corporations and their societal supporters to justify violence and repression through narratives of nationalism, culturalism, fear, prejudice, etc.

*Presentation by Shalmali Guttal during the opening plenary of the Civil Society Forum at the Committee for World Food Security, October 7, 2017.

Prospects for Good Global Governance:The View from the South

TAKE THE IMF OFF LIFE SUPPORT