End of year statement from Focus on the Global South 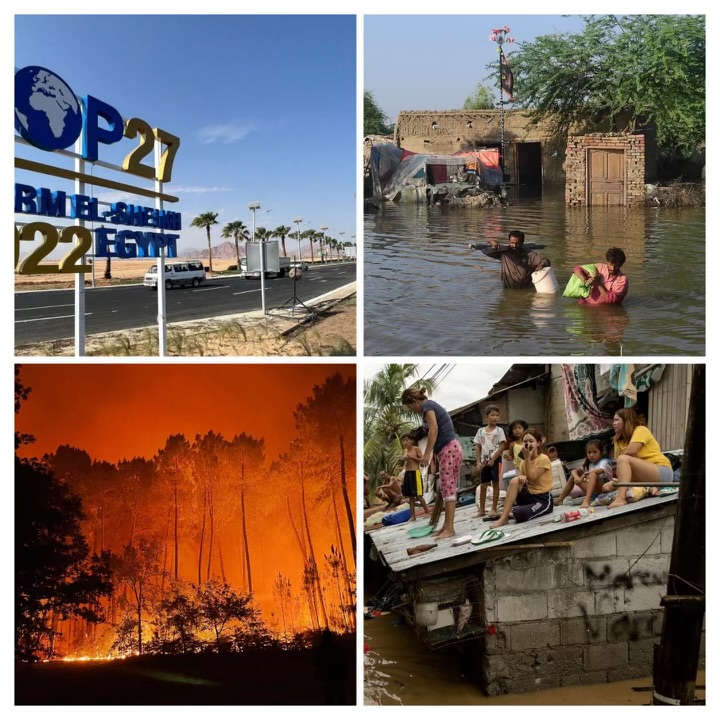 Extreme weather events in 2022 once again underlined that the planet is in an age of climate breakdown. Record-breaking heat waves in Pakistan, India, China and Europe were followed by extreme drought conditions in Europe, the United States, Kenya and China’s Yangtze basin. Following intense heat conditions, from June till October, Pakistan was wrecked by the most destructive floods in its history, which affected 33 million people, destroyed crops and vital infrastructure worth billions of dollars and took more than 1,700 lives. Floods also resulted in hundreds of deaths in Brazil, India, Afghanistan and Nigeria. As in previous years, over a dozen typhoons battered the Philippines in 2022 causing significant damage to agriculture and livelihoods, with poor and rural communities bearing the brunt as climate victims. Even as the Intergovernmental Panel on Climate Change (IPCC) had issued its most severe warning in its 2021 report, underlining ‘code red for humanity’, global emissions from fossil fuels hit a record high of 36.6 gigatonnes in 2022, according to latest projections by scientists.[i]

With the planet at an inflection point, the stakes could not be higher for governments to deliver decisions to meaningfully address the causes and manifestations of climate change. Remarkably, despite the extreme events this year and mounting evidence of devastation over the past two decades, the 27th edition of the Conference of the Parties (COP27) of the United Nations Framework Convention on Climate Change (UNFCCC) in Egypt was largely yet another hot air summit, and failed to secure commitments on most of the urgent and long overdue actions to address the climate crisis in responsible ways. Corporate sponsors and lobbyists continued to dominate with a record-breaking 636 fossil fuel representatives, affiliated with some of the biggest climate villains such as Shell, Chevron and BP, in attendance to ensure that their interests were protected. Ninety percent of the sponsors of the Egypt Summit (including Coca Cola, Siemens Energy, General Motors and Microsoft) have intrinsic ties with the fossil fuel industry.

Notwithstanding a two-day extension, COP27 made zero progress on mitigation. The expectation was that  large industrialized countries that historically created the climate crisis in the first place should have put forward concrete commitments to reduce their carbon emissions and ensure that global temperature rise does not breach the 1.5 degrees C benchmark. There is a recent consensus among climate scientists that if average global temperature were to rise above this threshold, some key ecosystems will tip over into new states, which will be largely irreversible and catastrophic for the planet. Recognising this, the IPCC, in its various assessment reports (ARs), had emphasized that developed countries should cut their greenhouse gas (GHG) emissions by 80-90% from 1990 levels and that global emissions should peak by 2025, fall by 43% below their 2019 levels by 2030 and 84% by 2050, which if not achieved would result in a global warming of 3.2 degrees C by 2100—an unlivable world.

While developed countries continue to attack countries such as India and China for their continued reliance on fossil fuels, the irony is that many European countries such as the United Kingdom, France, Germany, Finland and Norway are seeing a revival of coal-fired power plants, being justified by the energy crisis emanating from the Russian invasion of Ukraine. On a broader scale, it is deeply worrisome that military expenditure globally has been rising consistently in the past seven years. It reached an all time high of US$2.1 trillion in 2021 led by the US military spending of US$801 billion or 3.2% of its GDP.[ii] This travesty not only results in a massive rise in GHG emissions but also diverts trillions of much needed money from spending on climate just measures. It is estimated that if current trends continue in terms of global emissions, the remaining carbon budget[iii] to keep global warming below 1.5 degrees C will be exhausted by 2031.

Another important failure in the COP process is the commitment by developed countries to provide finance and technology to developing countries to enable them to adopt low carbon pathways, help them with adaptation strategies and transition away from fossil fuels. Again, developed countries have not met their promise to deliver climate finance up to US$100 billion a year from 2015 to 2025. Instead, big emitters such as the United States are now pushing for a new phase of carbon markets and nature-based solutions such as geoengineering and forest plantations. At the same time, developing countries, most vulnerable to climate change impacts; that have had multiple experiences of the destruction and devastation, tragically continue to support such market strategies and false solutions perceived to be convenient access to easy money rather than pushing for addressing the root causes of the climate crisis. At Egypt, US Special Presidential Envoy for Climate John Kerry, together with the Rockefeller Foundation and Bezos Earth Fund, was at the forefront pushing a new platform for carbon credits called the Energy Transition Accelerator that would allow US companies to shop for certified offset credits derived from clean energy projects in the developing world. This is despite evidence that much of the earlier carbon offset credits under the Kyoto Protocol were completely bogus and did nothing for sustainable development, nor reduce emissions.

The creation of a loss and damage (L&D) fund has been touted as the big success of COP27. The creation of such a facility is indeed a small formal step forward. It has been a demand of many vulnerable, low-income  nations for years, and should have been created much earlier. However, the devil is in the details. For one, there is little clarity as yet on the quantum, sources and operating procedures of the fund. Most are merely a rehash of previous COP outcomes and fail to concretize actual implementation of the L&D fund towards climate justice and reparations, and not just through aid and donations with attached conditionalities. The L&D document already indicates that not only  governments but diverse players, including insurance companies and other private businesses profiting  from climate victims’ loss and damage, will be involved. Secondly, given the history of diversionary tactics by developed countries in multilateral fora, the L&D fund negotiations will drag on and could be used to deflect attention from other critical issues such as the repeated failure of developed countries to own up to their historical responsibility for global warming, make deep cuts to their own carbon emissions, and deliver on commitments for adequate finance and technology to developing countries.

As the world stands at the brink of climate catastrophe, three decades of multilateral negotiations have shown that the UNFCCC is in a deep crisis of legitimacy. It must be urgently democratized to ensure that the voices of those in the frontlines of the climate crisis are heard and their human rights and fundamental freedoms to effective participation, peaceful assembly, and free speech are respected and protected. At the COP27 in Egypt, activists, civil society groups, and peoples’ movements faced intimidation, harassment, and repression—these have no place in any multilateral space or process that avows to be the supreme governing body of an international convention.

The failure of negotiations in the UNFCCC and COP27 to effectively tackle an accelerating crisis of planetary proportions is symptomatic of a global shift towards pro-corporate multilateralism that is mirrored in other multilateral fora, for example on food and agriculture, biodiversity and genetic resources, trade and investment, and the environment. Earlier notions of multilateralism where states make decisions on behalf of their citizens and regulate the economy and private sector in the public interest, are being set aside in favour of ‘networked multilateralism’, a multistakeholder model of global governance promoted by the UN Secretary General that gives corporations seats at regional and global decision-making tables. Expanding corporate creep in multilateral fora reached a high point through the strategic partnership agreement signed between the World Economic Forum (WEF) and the UN in June 2019.

As we move into 2023, UN member states must recognise that not only are the stakes too high, but also, it is not too late to redirect multilateralism towards the public good and preservation of the Earth – the only home that humankind knows.

The UNFCCC must also immediately stop the influence of corporations and their lobbyists at the COPs. Instead of promoting corporate designed false solutions such as geoengineering, carbon offsets and so called ‘nature based’ solutions, governments must prioritize and support proposals that enable systemic transformations in production and consumption, deepen democracy, enhance livelihoods, uphold human and collective rights, and protect the planet. These include food sovereignty, agroecology, renewable energy, building public economies, and ensuring democratic public control over natural resources.

The privatisation and commodification of public goods, services and the commons must be stopped, as must the relentless capture of lands, water and territories for corporate benefits. Mechanisms should be put in place to ensure that frontline communities who bear the brunt of climate related loss and damage are able to access resources from the proposed L&D fund. The global free trade architecture that includes the World Trade Organisation (WTO), Free Trade Agreements (FTAs) and Bilateral Investment Treaties (BITs) needs to be dismantled in favour of more deglobalised and regional frameworks between countries based on cooperation, solidarity and complementarity. States need to step up to their obligations and responsibilities of advancing the interests of their peoples and the environments they live in, and stop pandering to the greed of corporations and elites.

Clearly, we need to urgently fix this flawed multilateral forum and come up with real solutions and new strategies from the ground up if we are to surmount the climate emergency. This can only happen with greater political mobilization and pressure from below.  In the coming years, at Focus, we will redouble our efforts with social movements, labour unions and civil society groups across the globe in this endeavour.

[ii] Trends in World Military Expenditure 2021 by the Stockholm International Peace Research Institute may be accessed at https://www.sipri.org/sites/default/files/2022-04/fs_2204_milex_2021_0.pdf

[iii]  Analytical work by reputed climate scientists have set a global carbon budget for the amount of greenhouse gases that can be ‘spent’ (emitted) for a given level of global warming. If we exceed this budget before 2100, global temperatures will become higher than 1.5C leading to unpredictable and irreversible climate change. But as is evident from extreme weather events of the last few years, the climate is already more unpredictable with current levels of temperature rise than most expert scientific scenarios. 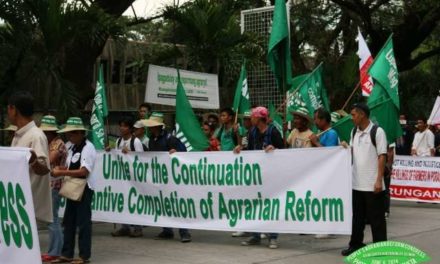 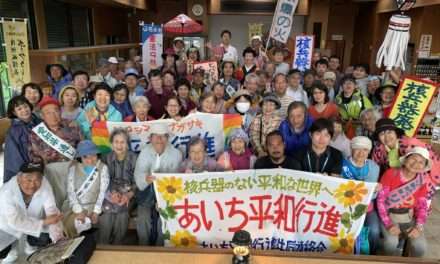