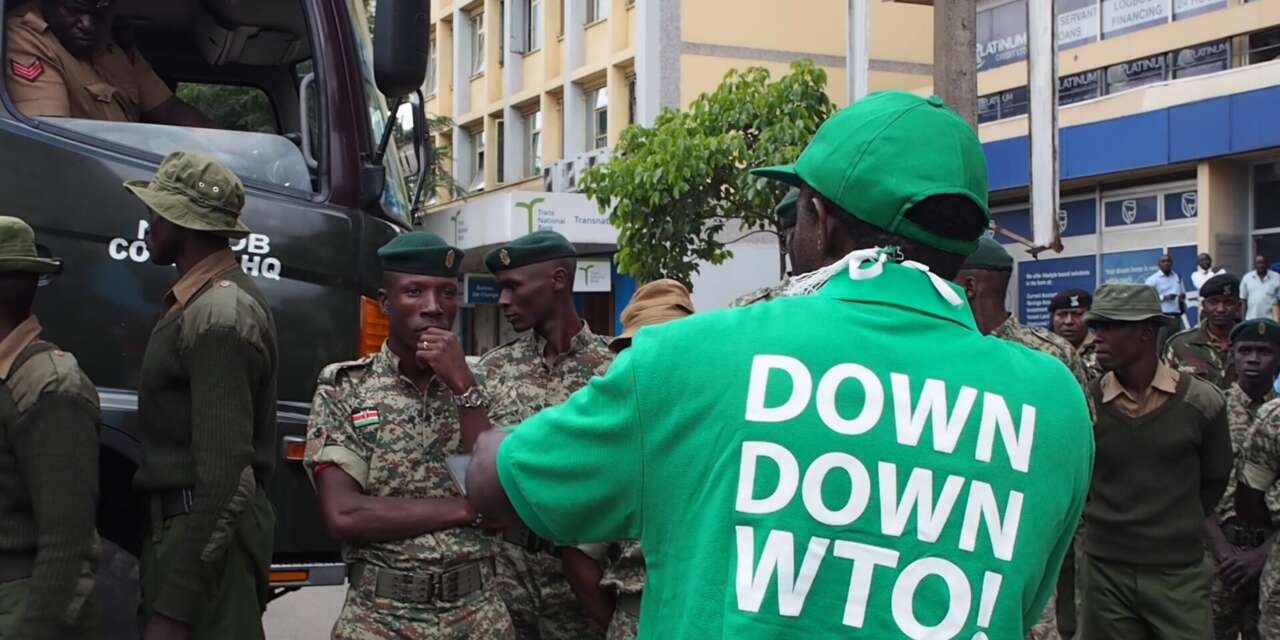 Cover photo by Afsar Jafri, Focus on the Global South India Office, during the #EndWTO Mobilisation in Nairobi, Kenya, December 2015.

The outcome of the 12th Ministerial Meeting (MC12) of the World Trade Organisation (WTO) is a big win for rich countries, but a massive defeat for the global South. Developing countries incurred big losses in several negotiating areas, while issues of critical importance–especially in the face of the continuing COVID pandemic, accelerating climate change, and looming food and economic crises–were once again disregarded and set aside. In a clear breach of WTO procedures, draft texts agreed in exclusive ‘green rooms’ were rammed through in the early hours of 17June without adequate time for all WTO delegations to study them. Negotiation and decision-making processes skewed in favour of wealthy countries is a persisting problem in WTO Ministerial Conferences. But they reached a new low at MC12 with inordinate pressure by the WTO Director General (DG) and wealthy countries to produce a semblance of success from a failing institution.

No waiver of TRIPS rules
The text adopted on June 17 is not a waiver of TRIPS rules to increase access to COVID vaccines and medical tools. Despite worldwide support for a comprehensive TRIPS waiver from over one hundred countries, thousands of civil society organisations (CSOs) and health workers’ unions, the WTO shamefully sabotaged the possibility to save millions of lives in the developing world and hasten the end of the pandemic. Acting on behalf of the big pharma industry and rich countries, the WTO DG and Secretariat pushed a text that contains only a few clarifications and allows a limited five- year exemption for using compulsory licenses for export of only COVID-19 vaccines. These clarifications only restate existing flexibilities in the TRIPS agreement and none of them add any new benefits to developing countries.

Loss of Fisheries Subsidies
The fisheries agreement text is a significant setback for developing countries. While the negotiating mandate recognizes special and differential treatment for developing and least developed countries, this principle was reduced to a two-year exemption from actions. This very short grace period means that subsidies provided by developing countries, including those to small-scale and artisanal fishers, would be subjected to WTO rules. The agreement also contains a loophole that would allow states to continue subsidising if these measures are implemented to rebuild fish stocks to a sustainable level. This carve-out favors developed country members such as the European Union, Japan and the US that have the necessary resources, and have been able to build up their industry infrastructure and systems due to long standing subsidy programs. Importantly, the fisheries agreement extends WTO disciplines into governance areas where it has neither institutional expertise, nor legitimate authority.

Food Security, Agriculture and Public Stockholding
The Declaration on the Emergency Response to Food Insecurity offers nothing by way of tackling the structural and systemic causes of hunger and malnutrition; instead, it commits members to further liberalisation of trade in food and agriculture products through global markets and adherence to WTO disciplines. The Declaration’s preamble expresses “concern” about the impacts of excessive price volatility for food and agricultural products, fiscal constraints and deteriorating terms of trade on food security, but then goes on to express “determination” to make progress towards a fair and market-oriented agricultural system.

A market-oriented agricultural trading system can hardly be fair when producers in wealthy and poor countries live in vastly unequal conditions, and when the terms of trade are skewed against small-scale food producers in developing countries by WTO rules that curtail their access to essential public infrastructure, support and services. Point 10 of the Declaration recognises the importance of domestic food stocks, but decisions regarding public stockholding programmes and public procurement that are important to developing countries have been kicked down the road yet again to the next Ministerial Conference.

Similarly, the Declaration on the WTO response to the COVID-19 pandemic and preparedness for future pandemics focuses on keeping global supply chains running unhindered through the WTO Trade Facilitation Agreement, and upholding WTO rules in the agreements on Services, Agriculture and TRIPS.  Despite verbiage on public health and scientific capacity, the Declaration offers no decisions on rescinding intellectual property rights protection on products, production processes and services, and on technology transfer that are crucial for building robust public health systems and pandemic preparedness in developing countries.

Moratorium on E-Commerce Duties
The continued extension of the moratorium on e-commerce duties is yet another big win for developed countries and the big tech industry. Developing countries have already lost billions in tax revenues since 1998 and yet another extension ensures that they continue to be relegated to the backwaters of digital industrialisation.

The Impossibility of WTO reform
Critical issues of reform that are a priority for developing countries, namely operationalising special and differential treatment and the functioning of the dispute settlement system, have been sidelined and deferred once again. The reference to WTO reforms  is a clear case of doublespeak, wherein submissions by developed countries sideline multilateralism and legitimise plurilateral clubs.

CSOs and social movements have raised concerns regarding new mechanisms that will bolster corporate control of WTO processes, the Joint Statement Initiatives (JSI) that undermine the Marrakesh Agreement and the multilateral basis of the WTO, and what is already unacceptable overreach of the organisation in areas such as health, food, gender, environment and sustainability.  Provisions being discussed under e-commerce have implications for data systems that impinge on the domestic policy space and sovereignty of developing countries.

Conclusion
A question that begs deeper reflection is why developing countries did not stand their ground in upholding the priorities of their peoples at a time of deepening crises. Clues to this can be found in the pernicious institutional culture that has been a hallmark of the WTO since its establishment in 1995. Practices of powerful countries resorting to arm-twisting, exclusion through the ‘green room’ processes, co-optation, and forum shopping both within and outside of the WTO are now well established through its chequered history and were demonstrated once again at MC12. The push-through-agreements-at-all-costs approach that has been exhibited by the current WTO DG provides no confidence for the protection of developing country interests going forward.

South unity in the WTO has been progressively undermined by an increasingly fragmented agenda without any attention to guiding principles and rules–especially Special and Differential Treatment. The lack of unity and collapse of southern coalitions such as the Group of 33, African, Caribbean and Pacific (ACP), African Group, G-90 and G-20 were important factors that led to the bad outcomes at MC12.   Upon her appointment by consensus in 2021, Director General Ngozi Okonjo-Iweala was expected to promote and protect the interests of the global South.  Instead, she became the leading edge of an effort to bamboozle them to produce decisions in favor of the global North.

One of the biggest tragedies of the MC12 is that a failing institution that was on its last legs has been resurrected as an instrument of a more advanced and dangerous form of neoliberalism. Despite this adverse outcome, we will redouble our efforts with allies across the world to monitor the impacts of the WTO’s dangerous agreements and intensify our campaign calling on developing countries to pursue avenues for economic and trade cooperation outside of the WTO’s neoliberal free trade dogma.  More than ever, we must raise our collective voice to demand the dismantling of the World Trade Organisation.

Download our Trade Dossier: Envisioning A Better World Without the WTO, a collection of analyses from Focus on the Global South, social movements and civil Society Organisations written in the run up to the #MC12. 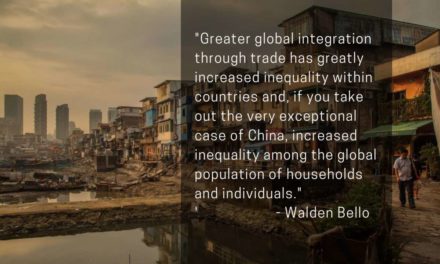 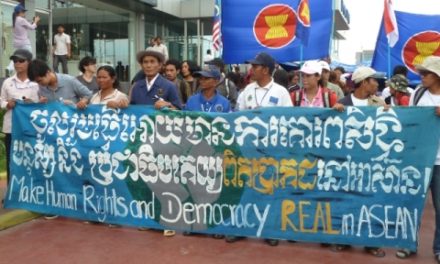