A Tree Born Crooked Will Never Straighten Its Trunk: Why One Cannot Turn the WTO Around 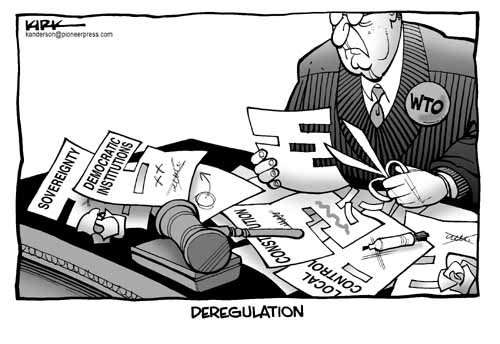 By Pablo Solon
Focus on the Global South

Since its establishment, there has always been a debate about the WTO amongst civil society organizations.  Some saw it possible to reform the WTO and others saw no redeeming factor in it and wanted it dismantled. In a way, the slogan “WTO: Shrink or Sink” expressed the middle point in these two approaches. Now, after almost two decades of the WTO, the facts are clear.

The limits to trade

The WTO began with the promise that it would bring increased economic growth through “free trade.” Today, it is clear  that this promise was never possible as we cannot have endless economic growth in a finite planet. The planet’s natural resources are nearly exhausted and there is a total disturbance in the vital cycles of the Earth System that threatens to turn into an environmental domino effect of unpredictable consequences.  The increase in economic growth benefited only the corporations and did not bring the promised “development” to the poor. The rich are now richer while the poor are poorer. That free trade was going to deliver benefits to the poorest was simply a myth.

In reality, if poverty were really to be addressed and the poor alleviated, increased economic growth was and will never be the answer, but redistribution of wealth and redress of  the inequalities worsened by the capitalist system. The irresponsible exploitation of the planet in the name of endless growth has put us all on a suicidal path to destruction. If the goals of the WTO to grow trade forever were to be met, other planets have to burn to achieve this.

World trade for whom?

The real problem with the WTO and why it simply cannot be reformed is that, not only does it have a crooked trunk that will never grow straight, but also, and more importantly, its roots are founded on the principles of profit-making for corporations and not of benefiting humanity and nature.

In fact, after 18 years of existence, the WTO itself has come to recognize that  global trade is concentrated among only  few corporations.

“Is trade concentrated in the hands of a few global companies?” asks the WTO in its World Trade Report 2013. And the answer is: “The findings suggest that current trade is mainly driven by a few big trading firms across countries.”

*For Developing Countries reported in the WBEDD, we report the exports share by the top 25% firms instead of top 10% firms due to data availability

It is interesting to highlight that in the United States the share of the top one percent  of exporters has increased between 1993 and 2002 from 78.2 percent to 80.9 percent, and that in the majority of developing countries only three to five companies hold more than 80 to 95 percent of exports.

What has happened is not a surprise: Even supposedly fair rules in an unfair reality can only benefit those that have more power. In an “open trade” or “free trade” regime, who can win—the sharks or the sardines? Even with “special and differential treatment” in favor of the sardines, the sharks will obviously win. The “superstar” corporations are the winners because their size, capital and monopolies give them the “comparative advantage” to win.

The issue, however, goes deeper and becomes more disturbing. Through  “free trade” rules in the WTO, the Free Trade Agreements (FTAs) and the Bilateral Investment Treaties (BITs) we have been witnessing the writing and implementation in parts of a new global constitution for the benefit of Transnational Corporations. The 60 agreements under the WTO go  beyond the issues of trade in goods. They also deal with food, health, employment, water, energy, climate, land, justice and almost all areas where sovereign states are normally supposed to govern.  We see global trade rules trumping national sovereignty and forcing governments to comply and take away their policy space.

The main goal of this new constitution—with the WTO now the basis and the FTAs and BITs the advance battalions—is to further shrink the states and let the free market expand and decide what is best for almost all aspects of life.

The limits of a reformist approach

Now, if this is what the WTO is, can we reform the WTO? Is it possible to transform it into a new organization that instead of promoting competition for the benefit of a few “superstar” exporters will promote solidarity, complementarity with real implementation of asymmetric rules to benefit the most disadvantaged and takes care of nature?

Many civil society organizations have made proposals to change certain aspects of the WTO but in reality can these proposals transform the essence of the WTO? Some good proposals Focus on the Global South supports because they stop the expansion of the WTO, or give for example more space for generic medicines, or subsidies to small farmers, but in reality, can we change the substance of the WTO following this roadmap?

The most radical calls demand the cutting out of areas of the WTO such as agriculture, services, intellectual property, investments, and others. It is an attempt to go back to the GATT (General Agreement on Trade on Tariffs) that only deals with goods. This approach limits the impact of the cancer but doesn’t extract the cancer. For example, many cases against climate initiatives are being stopped using the argument that they violate the “National Treatment” rule of the GATT that says that states have to treat no less favorable the foreign transnational companies vis-a-vis local producers.

In other words, can we limit our horizon to just resisting, conquering some flexibilities, trimming some issues and stopping the expansion of the WTO while the free trade agenda continues to advance through FTAs (that we also try to stop or limit), until sooner or later the WTO will revive its own negotiations taking as  reference what has been developed in these FTAs?

Why we need to speak loud and clear

The WTO cannot be reformed or tweaked or turned around to serve the people and re-establish harmony with nature. The only way to prioritize decent jobs, the right to food and the protection of nature will be to get rid of the WTO and dismantle the power of transnational corporations and the political-economic elites.

But while we fight this huge battle with this long term goal in sight, we also need to engage in the immediate battles to stop the expansion of the WTO and the free trade regime and fight to open flexibilities and contradictions in those agreements, but not with the illusion of reforming the WTO or FTAs. The aim should be to open some gaps that can benefit the implementation of some policies (generic medicines, increased administered prices for peasants, etc.) and undermine from inside these agreements while we build a counterbalance of forces that is able to bring them down. We have to use all the inside and outside tactics available but without creating confusion in relation to our overall strategic goal.

We are never going to dismantle this free trade regime with negotiation tactics. Inside strategic tactics can be very useful to stop sometimes one agreement, or to block a negotiation, or to change an article, but if we want to defeat the free trade regime or an institution like the WTO we need to build a new balance of forces led by social movements. And to follow this pathway, we have to clearly say that the crooked tree of the WTO cannot be straightened, not now, not ever.

The debate is over. Reform is an illusion. If we want to have a future for the planet and humanity, we need to #EndWTO!