Focus on the Global South has long been researching and sharing analyses of the negative impacts of ADB operations, calling for an end to the ADB’s immunity and lack of accountability. In 2017, we join people’s movements and civil society in building a region-wide challenge to the ADB’s immunity.

On the occasion of the 50th Annual Governors’ Meeting of the ADB which is happening in Yokohama, Japan from May 4-7, 2017, Focus on the Global South is releasing this special newsletter highlighting the Asian people’s resistance against the Bank. 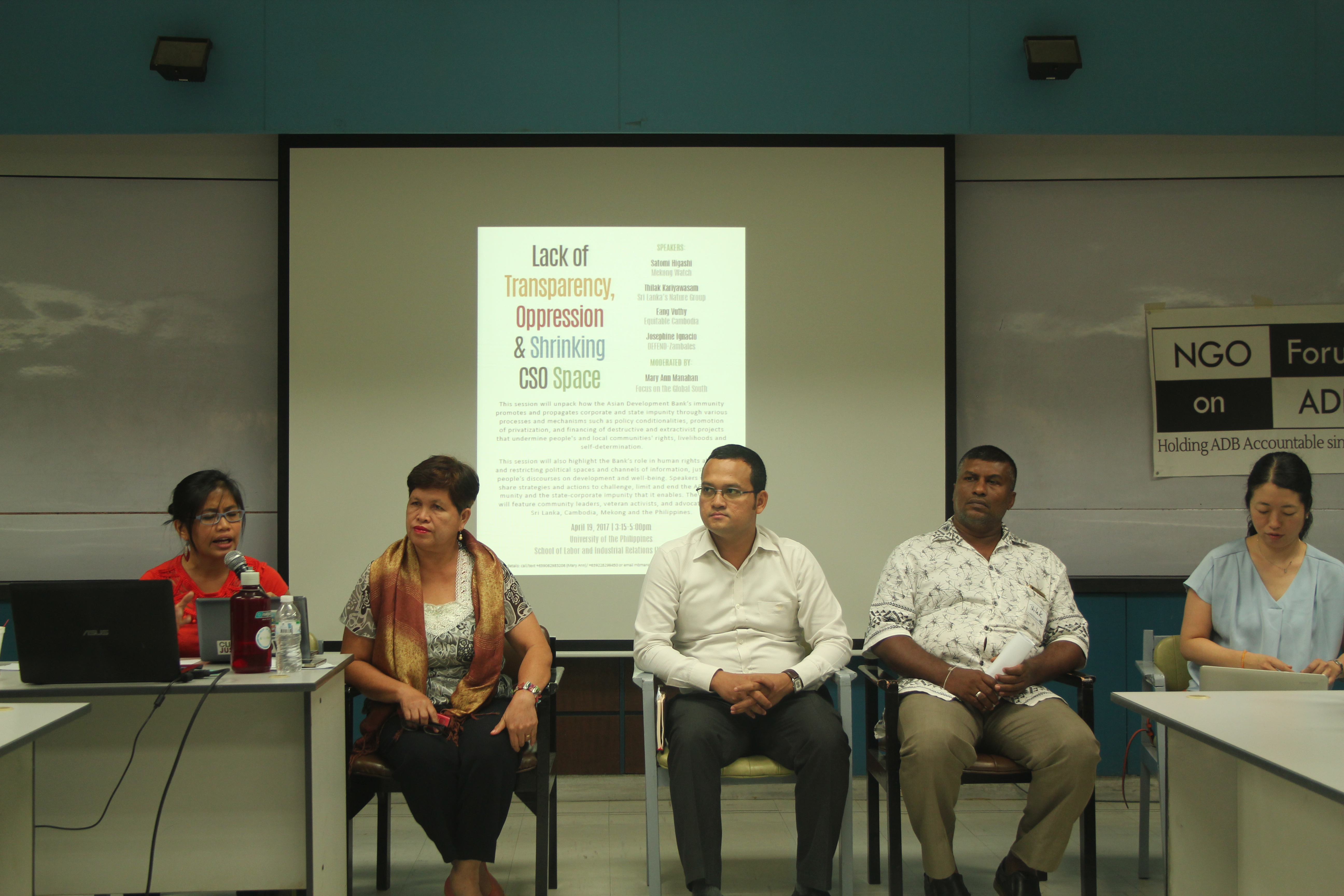 Since 1966, the Asian Development Bank (ADB) has peddled the illusion that it is an institution committed to making the region free from poverty. According to the Bank, it has mobilized more than USD 250 billion worth of investments in infrastructure, research, and knowledge sharing in its half a century of operations in Asia and the Pacific. The ADB, however, shamelessly continues to shell out illegitimate debts to its member countries even if it had disastrous project and policy outcomes.  Fifty years of ADB operations has left a track record of people displaced, impoverished, malnourished, and hungry. The destructive impacts spread across all facets of the environment: forests, rivers, oceans, arable lands including endangered and close-to-extinction animal and plant species in their habitats. The ADB is also guilty of contributing to global warming through its financing of dirty energy projects.

We, the community representatives, youth associations, students, and civil society organizations gathered here on the 19th – 20th of April 2017 at the University of the Philippines SOLAIR declare that:

Shalmali Guttal on Challenging the ADB

Shalmali Guttal, Executive Director of Focus on the Global South, explains why civil society organisations and movements have been organising against destructive ADB projects for the past 20 years. This video was filmed part of a series for the Working Group on IFIs called, ADB: Voices from the Ground.

Focus Publications on the ADB 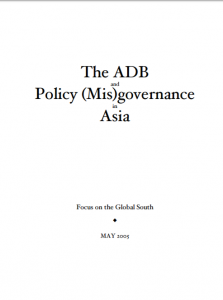 As the Asian Development Bank (ADB) holds its 38th Annual Governors Meeting in Istanbul, Turkey on May 4-6, 2005, Focus on the Global South releases its latest publication, The ADB and Policy (Mis)governance in Asia. This dossier puts togethereleven articles, each tackling important aspects of institutional and policy governance of the Bank. This packet also contains statements on ADB policies from movements, ADB watchers, civil society groups and social critics.

Profiting from Poverty: The ADB, Private Sector and Development in Asia 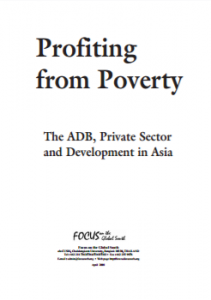 A compilation of articles o­n the ADB, its policies and impacts. This book was produced coinciding with the ADB annual general meeting in Honolulu from the 7th-11th of May 2001.
Read More

Manila—FOCUS on the Global South led a thematic discussion on lack of transparency, increasing oppression, and shrinking of CSO space as part of the conference called “Asian Peoples’ Call on Challenging the ADB’s Immunity,” held April 19-20 at the University of the Philippines in Quezon City,

The session, participated in by around 30 participants, among them veteran ADB campaigners as well as youth leaders learning about ADB for the first time, aimed to unpack the issues and challenges confronting affected communities and campaigners resisting ADB policies and projects on the ground.

Marking ADB’s 50 years, Protest Actions
in Over 100 places in India

New Delhi—People’s movements and other civil society organizations across India are holding over 100 actions of protest in 21 states of the country between May 1 and 7 to mark the 50th anniversary of the establishment of the Asian Development Bank (ADB), highlighting gross human rights violations, loss of livelihood, and environmental destructions caused by the ‘development model’ being pushed by ADB and other international financial institutions (IFIs), while using public money.

Photo Gallery of Actions and Discussions