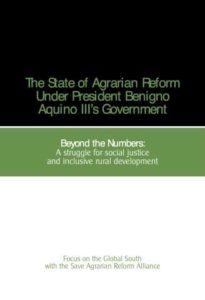 Based on these field accounts, what has emerged is a picture of implementation characterized by paralysis and the retreat of agrarian reform resulting from the following: Department of Agrarian Reform’s (DAR) lackluster performance; a ‘legally conservative’ secretary; budget cuts; efforts by landowners and anti-agrarian reform forces to subvert and block land redistribution; and an ineffective bureaucracy that has not functioned with the sense of urgency needed to complete land distribution by June 2014. The non-completion of the Comprehensive Agrarian Reform Program Extension with Reforms (CARPER) law or RA 9700 will affect more than a million Filipino farmers.