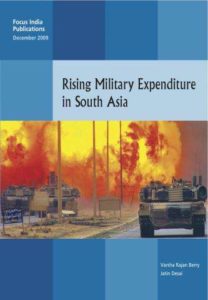 The potential escalation in the military expenditures worldwide and especially in South Asia has been drawing global attention for a long time. The Focus team has been working on a campaign for reduction in the defence expenditures; this paper is a part of our ongoing campaign and to further strengthen efforts being made for a peaceful world. Weapons are not needed to protect any society and thus the justifications given by the governments, fall flat. It is important for us to understand that to resolve various kinds of conflicts; the key is dialogue, negotiations and confidence building measures. We through this paper, urge the governments to reduce the expenditure on defence and work towards peace.

Militarism is a scourge, which arises out of conflict and leads to further conflict. It destroys the well being of a society and takes away from social spending. Only an end to militarism will lay down the norms of a peaceful and just society. Although, our ultimate goal is total abolition of weapons but here in our paper we talk about reduction in defence budgets, which is a step leading us to this goal.

This paper will be useful for activists’, researchers and common people to build an understanding on the politics of increasing weaponisation, conflicts in South Asia and the money spent each year on defence vis-àvis social sectors. It will also help mobilize people to join hands in the campaign against militarisation.