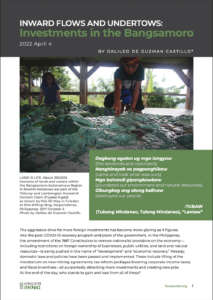 Focus on the Global South is officially launching Development in the Bangsamoro: Whose Agenda and Interests?, a miniseries of think pieces and articles that aim to examine critical economic development issues in the Bangsamoro Autonomous Region in Muslim Mindanao (BARMM) in the Philippines and to reflect on their implications on the rights of different sectors and peoples. This initiative is being undertaken with the guidance of Loyukan, a formation of different Indigenous Political Structures, indigenous peoples’ organizations, and individual and organizational IP rights advocates.

Development in BARMM remains a critical issue in the broader struggle for social justice, peace, and self-determination. For many decades, the region has been mired in extreme inequality and poverty despite being one of the most resource-rich regions in the Philippines. Thus, the important question that emerges from this is who has been benefiting from the development of these resources, and who are excluded?

Key policies imposed by governments on the region since the colonial period have deprived the most marginalized peoples in the region of their access to the commons, favoring instead domestic and multinational corporations, landlords, and powerful clans. These policies have also pitted the tri-peoples of Mindanao (i.e., the Moro, Lumad, and migrant settlers) against one another on issues of land and resource ownership, thereby creating a breeding ground for conflict. Conditions of poverty, inequality, and conflict have reinforced one another for the benefit of the powerful and the wealthy and at the expense of the dispossessed. The failure of all previous administrations to address the roots of this historical injustice against the tri-peoples (mainly due to their adherence to the same neoliberal framework that has aggravated inequality and injustice) have allowed conditions of conflict to persist.

Since the passage of the Bangsamoro Organic Law (BOL) that established BARMM in 2019, the region has been in transition from conflict to autonomy. However, key elements and pillars of the development plans and projects being pursued by the transitional government reveal that there is no significant change in the path to economic development.

Investments in the Bangsamoro

We kick off the miniseries with this article from Galileo de Guzman Castillo that assesses the socioeconomic conditions in BARMM, identifies the private investments across different industries in the region, examines the vested interests behind these investments, and reflects on their implications on the rights and autonomy of some of the most marginalized sectors and peoples whose aspirations have historically been left out in regional development plans and projects. De Guzman Castillo argues that the private investments being pursued by the transitional government in the region still reinforce the concentration of resources and wealth in the hands of a few while largely excluding the majority. As such, they ultimately fail to address the conditions of conflict in the region.