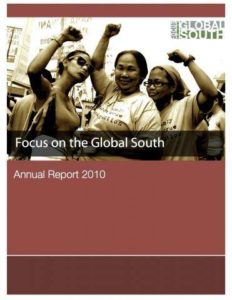 National public consultation process on the negotiation framework of the EU-Thailand FTA was successfully conducted throughout Thailand. There were four open consultations in different regions of the country and one expert meeting in the capital. Altogether more than one thousand people were involved in the process. At the end, a comprehensive set of recommendations derived from all sectors was submitted to the government. This document was the first of its kind, and helped push the government to review its position and delay the negotiations. This process was the result of a campaign by Focus on the Global South and its allies to democratise trade negotiation procedures.

The ASEAN Peoples’ Forum (APF) in Hanoi, in which Focus staff had put a great deal of effort to shape content and process while working with the official Vietnamese host organisations, was successful in exposing Vietnamese participants to the various controversial issues and debates. In this forum, Focus’ effort in conjunction with regional groups also achieved significant progress in obtaining endorsement from civil society groups, notably from Vietnam and Indonesia, for the initiative to raise the issues of sustainability and the need for a common ASEAN regional environmental platform, often referred to as a 4th ‘pillar’ in addition to the existing economic, socio-cultural and political security ‘pillars’.