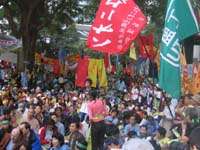 Nicola Bullard
(HONG KONG, 11 December) More than 4,000 workers, farmers, migrant workers chanting "kong yee sai mau " (no to WTO) marched through the bustling commercial district of Hong Kong on day one of the Peoples’ Action Week, which will continue throughout the WTO ministerial from 13-18 December. Local speakers at the rally called for an end to collusion between government and business — a hot issue in Hong Kong, where the democracy movement’s basic demand for one person, one vote can bring up to half a million people onto the streets. Calls to slow down trade liberalisation or even shut down the WTO are a much harder sell, given Hong Kong’s history as a free trade port and financial hub for the region, but if the young waiter who wished us "luck" against the WTO is any indication, perhaps radical sentiments are being stirred. 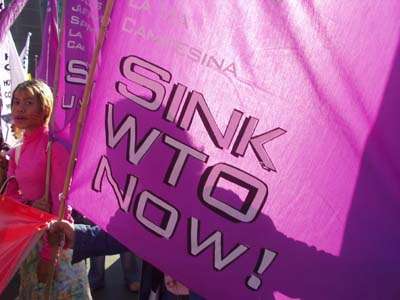 The effects of trade liberalisation are here for everyone to see: 270,000 migrant workers — the vast majority women from the Philippines and Indonesia and many very young — have taken the huge step of leaving their homes and families simply because they cannot find work in their own countries. The Hong Kong working class, too, is a victim of trade liberalisation and between 80-90 per cent of factories have closed and re-located to mainland China, where wages and working conditions are lower.
Despite the difficulties of building social movements and trade unions in a situation where 150 years of British colonialism and Hong Kong’s more recent political identity as a "special autonomous region" of the Peoples Republic of China have kept democratic spaces to a minimum, local activists have taken up the challenge of responding to the WTO’s presence in Hong Kong by forming a broad coalition to engage in public education and to work with international groups on trade and WTO issues.
The local press, however, has shown little interest in anything but the spectre of violent demonstrations, which they continue to predict despite yesterday’s peaceful protest and repeated assurances from the organisers and protestors that they are committed to non-violent action.  Such is the level of anticipation of the press and the police that they will be disappointed if their expectations are not met.
Indeed, the local authorities have done little to facilitate friendly relations with the  local organisers and international activists: in the past days they have raided offices, detained people for questioning at the airport, and refused to allow tents and stages to be erected at
one of the civil society venues. They are also making sure that the protests are out of sight and don’t disrupt life in the city: the rally on the opening day of the ministerial –13 December — is a 20-minute walk along an expressway finishing in a cul-de-sac surrounded by fences
on one side and the Hong Kong Harbour on the other. 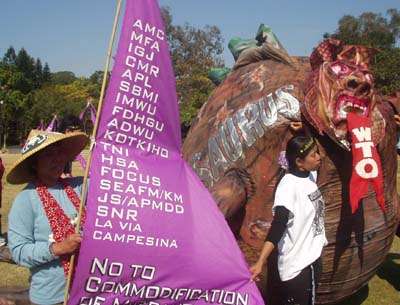 Attention will soon shift to the debates inside the WTO, where gridlocks remain on the key issues of agriculture, services and non-argicultural market access. In the absence of "progress" in these areas it’s likely that the WTO will sell the so-called development package" (see Focus: On the Road to Hong Kong #4) as the key achievement of the Hong Kong meeting, despite the fact that centre-piece "trade for aid" proposals are little more than sweeteners to push least developed countries to further liberalise their markets in the name of "capacity building" and "trade facilitation".  If the journalists are intent on reporting violence, they need look no further
than the negotiations inside the Convention centre.