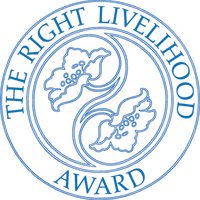 The Right Livelihood Award, also known as the ‘Alternative Nobel Prize’ was announced in Stockholm yesterday. Dr.Walden Bello (Executive Diretor of Focus o­n the Global South) was recognised for “playing a crucial and complementary role in developing the theoretical and practical bases for a world order that benefits all people.”

The 2003 Right Livelihood Awards go to individuals and organisations from New Zealand, the Philippines,South Korea and Egypt working for disarmament, justice, partnership and environmental sustainability.

The 2003 Right Livelihood Honorary Award honours New Zealand’s former Prime Minister David Lange, whom the Jury recognises “for his steadfast work over many years for a world free of nuclear weapons”

Walden Bello and Nicanor Perlas from the Philippines play crucial and complementary roles in developing the theoretical and practical bases for a world order that benefits all people. The Jury honours Bello and Perlas “for their outstanding efforts in educating civil society about the effects of corporate globalisation, and how alternatives to it can be implemented”. The Citizens’ Coalition for Economic Justice (South Korea) has since 1989 worked successfully to make Korean economic development more just, inclusive and democratic. The Jury commends “the rigour with which it has developed and disseminated its wide-ranging reform programme, based o­n social justice and accountability and the skill with which it is now applying the same values to promoting reconciliation with North Korea”.

SEKEM (Egypt) shows how a modern business can combine profitability and engagement in world markets with a humane and spiritual approach to people and respect for the natural environment. The Jury sees in SEKEM “a business model for the 21st century in which commercial success is integrated with and promotes the social and cultural development of society through the ‘economics of love’ “.

WALDEN BELLO Philippines (2003)Walden Bello is o­ne of the leading critics of the current model of economic globalisation, combining the roles of intellectual and activist. As a human rights and peace campaigner, academic, environmentalist and journalist, and through a combination of courage as a dissident, with an extraordinary breadth of published output and personal charisma, he has made a major contribution to the international case against corporate-driven globalisation.

Bello was born in Manila in the Philippines in 1945. He was studying in Princeton for a sociology Ph.D in 1972 when Ferdinand Marcos took power, and plunged into political activism, collecting his Ph.D, but not returning to the university for another 20 years. Over the next two decades, he became a key figure in the international movement to restore democracy in the Philippines, co-ordinating the Anti-Martial Law Coalition and establishing the Philippines Human Rights Lobby in Washington.

He was arrested repeatedly and finally jailed by the US authorities in 1978 for leading the non-violent takeover of the Philippine consulate in San Francisco. He was released a week later after a hunger strike to publicise human rights abuses in his home country.

While campaigning o­n human rights he saw how the World Bank and IMF loans and grants were supporting the Marcos regime in power. To expose their role, he took the risk of breaking into the World Bank headquarters in Washington, and brought out 3,000 pages of confidential documents. These provided the material for his book Development Debacle (1982), which became an underground bestseller in the Philippines and contributed to expanding the citizen’s movement that eventually deposed Marcos in 1986.

After the fall of Marcos, Bello joined the NGO Food First in the USA, and began to expand his coverage of the Bretton Woods institutions, in particular studying the ‘newly industrialised countries’ of Asia. His critique of the Asian economic ‘miracle’, Dragons in Distress, was written six years before the financial collapse that swept through the region.

His recent work has been criticising the financial subjugation of developing countries and promoting alternative models of development that would make countries less dependent o­n foreign capital.

In 1995, he was co-founder of Focus o­n the Global South, of which he is now executive director. Focus seeks to build grassroots capacity to tackle wider regional issues of development and capital flows. When the Asian Financial Crisis struck two years later, Focus played a major role advocating a different way forward.

Bello argues that “what developing countries and international civil society should aim at is not to reform the WTO but, through a combination of passive and active measures, to radically reduce its power and make it simply another international institution co-existing with and being checked by other international organisations, agreements and regional groupings… It is in such a more fluid, less structured, more pluralistic world with multiple checks and balances that the nations and communities of the South will be able to carve out the space to develop based o­n their values, their rhythms, and the strategies of their choice.”

At the abortive WTO meeting in Seattle in 1999, Bello played a leading role in the teach-ins around the protest events and was later beaten up by the Seattle police. He was detained again by the Italian police and nearly run over by a police car at the 2001 G-8 summit in Genoa. He also played a key role in civil society circles in elaborating the strategy to derail the WTO Ministerial in Cancun in September 2003.

He has also played a leading role as an environmentalist, and is former chairman of the board of Greenpeace Southeast Asia. His 1998 book A Siamese Tragedy, documenting the environmental destruction of Thailand, became a bestseller there and won praise from former Thai Prime Minister Anand Oanyarachun. It received the Chancellor’s Award for best book from the University of the Philippines in 2000.

Bello has campaigned for years for the withdrawal of US military bases in the Philippines, Okinawa and Korea, and has helped set up several regional coalitions dedicated to denuclearisation and demilitarisation, and a new kind of security plan based o­n meeting people’s needs.

After September 11 2001, he was a leading voice from the South urging the USA not to resort to military intervention – which he believed would exacerbate the problem – but to tackle the root causes of terrorism in poverty, inequality, injustice and oppression. In March 2002, he led the peace mission to the southern Philippine island of Basilan, where the US army recently sent their special forces. He was also o­ne of the leaders of a peace mission of Asian parliamentarians and civil society activists that visited Baghdad in March 2003 in a last-ditch effort to stop the US invasion of Iraq.

Bello’s current and immediate past roles include:

National Chair Emeritus and National Chair of the party Akbayan, o­ne of the fastest growing parties in the Philippines, which has two members in the National Assembly. Professor of sociology and public administration at the University of the Philippines. Executive director of Focus o­n the Global South. Member and former Chair of the board of Greenpeace South East Asia. Visiting Professor in Southeast Asian Studies at the University of California at Los Angeles. Board member of Food First, the International Forum o­n Globalisation, and the Transnational Institute. Bello has won praise for his writing, as the author or editor of 11 books o­n Asian issues and a range of articles, notably American Lake: The nuclear peril in the Pacific (1984) (co-authored with Peter Hayes and Lyuba Zarsky), People and Power in the Pacific (1992), Dark Victory: The United States and Global Poverty (1999), Global Finance: Thinking o­n regulating speculative capital markets (2000) and The Future in the Balance: Essays o­n globalisation and resistance (2001). He won the New California Media Award for Best International Reporting in 1998. The Belgian newspaper Le Soir recently called Bello “the most respected anti-globalisation thinker in Asia”. 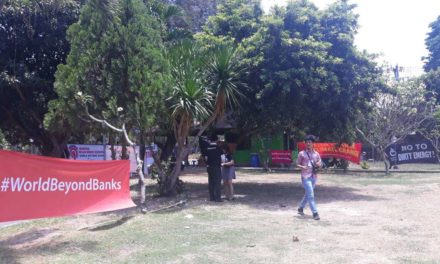