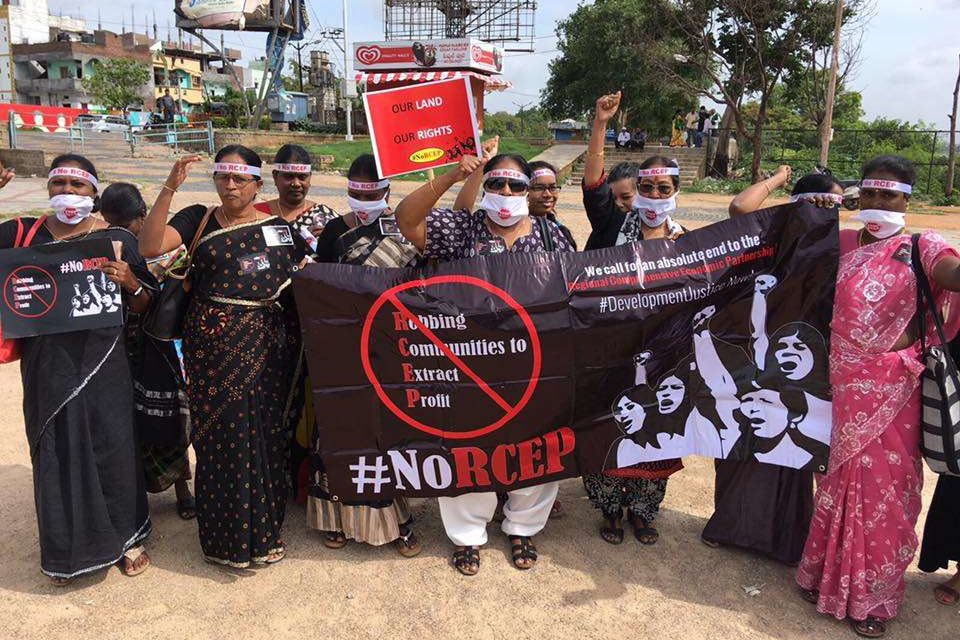 We join hands to resist RCEP and Free Trade Agreements which are an Onslaught on the Lives, Livelihoods and Rights of the Majority of Indians and on the Nation’s Sovereignty

At this People’s Convention on 23 July 2017 in Hyderabad, more than 600 of us have gathered from across India, not only as individual citizens but also as representatives of various organisations and communities. We represent peasants, agricultural workers, animal rearers, plantation workers, women farmers, fishworkers, trade unions, industrial and mining workers, street vendors, informal workers, sex workers, insurance and bank employees, public services employees, students, IT engineers, science teachers, lawyers, environmental and social activists, HIV-positive persons, women’s organizations, Dalits, adivasis, and Denotified-tribes. Together, these diverse sections make up a vast majority of Indians.

When we evaluate the impact of Free Trade Agreements (FTAs) and RCEP on each constituency, it is clear that they are an onslaught on our lives, livelihoods and rights. In particular, RCEP is the world’s largest mega-FTA and its impact will be enormous and widespread. When farmers are agitating across India for better prices for crops and committing suicide, RCEP would remove import tariffs, pushing them further into crisis with cheaper imports of crops and milk products. Local manufacturing will take a hit, with workers losing their jobs and wages, getting pushed into unorganised sector. With stronger patent rights for big pharma companies, RCEP will increase the costs of medicines and damage India’s manufacture of generic drugs. Public services such as health and education will be even more privatised, making it prohibitive for the masses to access and putting additional burden on women who have historically been involved in survival work. It will also facilitate free access to Indian data by global big business, giving them control over every sector.

As we share the experiences of over two decades of corporate globalisation, it is clear that the most vulnerable sections such as Dalits, adivasis, small farmers, unorganized workers, denotified tribes, minorities, women and children stand to lose the most in this game. Those who gain will be the big corporations. The latest anti-democratic weapon is the Investor-State Dispute Settlement (ISDS) mechanism which obligates the government to protect the safety of investments of foreign companies rather than the rights and interests of its citizens foremost. Most importantly, the agreements undermine the sovereignty of our government to make its own laws and policies. It is shocking that such far-reaching agreements are being negotiated without discussion with the public and in the Parliament, State legislatures and local self Governments.

We assert the following:

 We strongly oppose the onslaught of corporate globalization by which policies and laws of the country are being made to suit the interests of multinational corporations. We want democratic governments to retain the sovereignty to make laws and policies in the interests of the citizens, particularly the more vulnerable sections – whether it is import tariffs, subsidies, minimum wages or protections for its people and environment.

 India should immediately halt RCEP talks and negotiations on other FTAs. Indian government should place all details of the negotiations before the public and hold extensive and meaningful consultations on FTAs with people’s organisations including farmer unions and trade unions.

 The government should immediately debate RCEP and other FTAs in the Parliament, and hold consultations with state governments and local self-governments.

 India should adopt a law that no international trade agreement should come into force without ratification by the Parliament.

 All state governments and political parties should declare their stand on RCEP and other FTAs.

All the diverse groups at this People’s Convention stand for social, economic and environmental justice. We stand for a new vision of development and trade that creates dignified jobs, sustainable farming, quality public services, respects democratic decision-making and the principles of substantive equality, socialism, and of federalism enshrined in the Constitution of India.